Dandakaranya: The Rebirth (PunarJanma) of the Bangladeshi Hindu 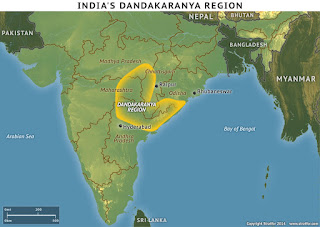 Those of us who believe in punarjanma (rebirth) want to be born free like the dolphins and albatrosses traveling around the world; or for some it is to be a film star or the cricket captain; Rabindranath or Bill Gates; or free-wheeling baul (singing minstrels of Bengal). Yet, we can not be sure if we will be reborn in our images until I revisited Dandakaranya Hindu refugee villages in the summer of 2008 after more than 40 years since my last visit. My elder brother Dada or Sankar, was a medical doctor from 1950s through 1970s for refugee rehabilitation. I visited him several times in 1960s in Koraput, Orissa, then headquarters of the Dandakaranya Development Authority (DDA). I was enchanted by Dandakaranya’s beauty with forests and rolling hills, with a mix of Oriya tribal and non-tribal population, Bengali and peoples from other Indian provinces giving the small place its cosmopolitan character. Being DaktarBabu’s (doctor’s) brother lots of people knew me than I could ever know them. I received namaskar greetings from strangers during my hikes through neighboring villages and hamlets. I became a part of them. Once a friend of mine and I hiked to the top of Tabletop Mountain, a popular destination for visitors, a short distance outside Koraput town. We missed a pack of hyena that ignored us for a prey they were after. Our knowledge of hyena was of the caged animal we saw at zoo not as a ferocious predator. Some peasants working in fields below noticed this extraordinary saga. Before our return hours later the entire community was ready to give us lessons on avoiding wildlife danger. 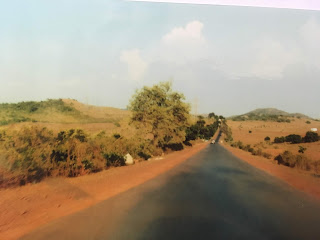 Road through Dandakaranya
﻿
During those trips I met many people including a one-time DDA head, Mr. Saibal Gupta, I.C.S. and his wife Ashokadi, an Indian Freedom Fighter and one of the rescuers of abducted girls and mothers after the infamous anti-Hindu Noakhali Danga Pogrom which began in October 1946 organized by the then Colonial British-India's ruling Muslim League Party of Bengal Province. She was the only person whom I met in the 1960s and again in 2008 in Calcutta before and after my trip. Ashokadi gave me books to read on Dandakaranya before my travel, and I had to give her an eyewitness report on June 3, 2008 after my return mentioning about rebirth of persecuted Bengali Hindus now as devoted Orissan. (In 1918 I came to know of Mrs. Apala Gupta Egan of California, youngest daughter of Saibal & Ashoka Gupta, and a big help of our Indian Subcontinent Partition Documentation Project [ISPaD]). Dandakaranya Forest covers a large swath of central India that stretches into states of Chattisgarh, Orissa, Andhra Pradesh, and Maharashtra.
In the 1960s an occasional treat was to travel with Dada in his medical van – space permitting – during his medical camps to exotic places: Malkangiri, Nowrangpur, Pakhanjore, Bastar, Raipur, Umorkote, Kanker, Jagdalpur and more. These trips were mostly pre-planned, sometimes taking days, except for emergencies. Trips took him to new refugee villages as well to sparsely located tribal villages. I still remember Dada rushing to Raipur Station which was the first stop of the Hindu refugees heading from Bangladesh (East Pakistan)-West Bengal border to their new life to an unknown destination. As anti-Hindu pogroms were routine in Bangladesh (East Pakistan) Dada’s stay at Raipur depended on the severity of injuries of arriving Hindu refugees. One of the worst was that of the Hazrat Bal Danga killing of 1964 when tens of thousands of Hindus were killed in Bangladesh, and millions of poor oppressed-caste Hindu peasants were forced to flee their homeland. Government of India shipped those hapless victims directly to Raipur in Madhya Pradesh – including injured and rape victims – over 24 hours by train from the border, instead of going though transit camps in West Bengal. In the 1960s villages were in the formative stages, with forest being cleared for habitation and cultivation, with barely any commercial, educational and social facilities. Lives were at the edge of existence, future uncertain. Deaths due to disease and wild animal attack were common. Yet at every hamlet old and new residents welcomed Doctor’s party with great warmth and enthusiasm. Individuals shared their stories of misery and happiness. People would walk miles to see a doctor. Some would insist on gifts of cucumbers, chicks, baby animals and bird eggs. (Dada raised a dog, a peacock and a peahen from those gifts as pets.) This time in one Malkangiri village Usha Debi introduced her son Biswajit as your “Dada’s son” because of Dada delivered Biswajit successfully of her complicated pregnancy. Nevertheless, each refugee was acutely aware then that they were not only starting a new life, but also being reborn as a completely new person with ties permanently cut from their ancestral land of thousands of years. 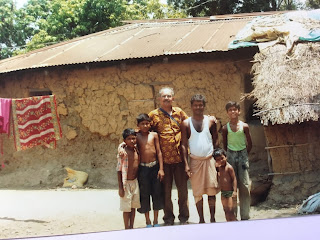 One of the few remaining mud-walled homes 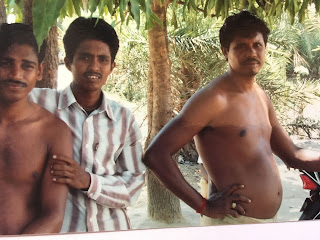 Welcome home!
﻿
The Punarjanma (The Rebirth): My trip came to fruition when our friend Basanti introduced me to his elder brother Dada, The Hon. Arun Dey, an Orissa State Legislator, who then introduced me to The Hon. Nimai Chandra Sarkar, an Orissa Legislator from Dandakaranya. Traveling again in 2008 reminded me of noted Bengali writer S. Wazed Ali’s Bharatbarsha: Things remain the same forever in India. In spite of the recent breathtaking transformation in India I took the same train to Vizianagram in Andhra Pradesh State, disembarked at the same late hour and caught the same night bus to Dandakaranya. This time however I went directly to Malkangiri, 5 to 6 hours away from Koraput where the bus stopped before sunrise. (Now there is a train from Koraput to Calcutta that I took on my return journey.) At the Malkangiri bus stop three young Sarkar associates, Goruranga, Arjun and Dilip, welcomed with a bouquet of wild flowers and reliving me of my two serious concerns while visiting remote areas: transport and lodging. They had arranged a rental car and the Circuit House for lodging. They had also scheduled visits to a number of villages, meetings with community leaders, homes, clubs, associations, and ashrams. Dandakaranya was settled almost entirely by poor, oppressed-caste Hindu peasant victims of Islamist persecution. 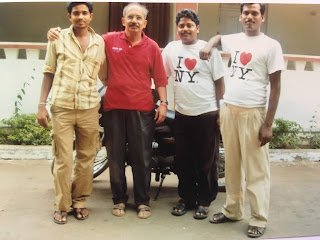 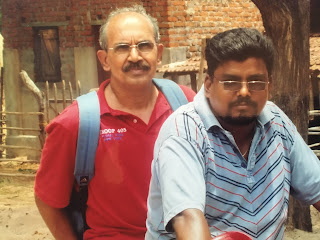 I remember Dandakaranya as a land with villages tucked in midst of forest. Now it is the other way. Dandakaranya Forest is a slow growth forest with little rainfall. Thus initial years of struggle from wet agriculture of Bangladesh to a dry land cultivation was extremely difficult for poor, often illiterate, peasants. Generations of struggle has now made Dandakaranya a food surplus area from a deficit region. A young tribal man told visitors as to how tribes benefited from intermingling with Bengalis by learning from them crop diversification, irrigation, raising farm animals, different types of cultivation, education and more. What was remarkable was that the signs of prosperity were everywhere. Each family has replaced their original mud building with brick and concrete. After a long search we found one original mud-walled, tin-roof home that belongs to the family of Sri Subal Namo. NamoBabu graciously welcomed us to his home. 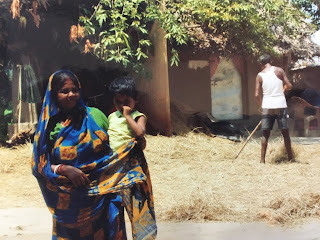 Most homes have flowering and fruit trees, and vegetable gardens. All have "gola" granaries full of harvest. From nothing people have built shops, businesses, transport companies, consultancy, mandirs, ashrams, clubs, schools and industry. Of Malkangiri’s four rice mills two belong to people who didn’t even have their shirt on their back. Some have become teachers, professors, lawyers, doctors, industrialists, bankers, politicians and civil servants. Someone gave me a number of a young man who is now working in the U.S. Every family has one or more cell phones, and bicycles are being replaced by motor bikes. Riding Gouranga’s bike I too felt like being reborn in God’s land. The refugees have elected legislators (and in Chattshgarh State.) Villages didn’t look that different from their ancestral Khulna, Faridpur, Rongpur, Mymanshingh villages, except for the lack of ponds. Still a few brave ones have built ponds raising fish and rearing ducks. In discussions several concerns were voiced: Orissa’s ban on Bengali medium schools. (Initially there were Bengali-medium schools, but that was changes later. Recently Orissa has agreed to offer one subject to be taught in Bengali, while West Bengal supplying the books. Some of the general discomforts have been: promises of vernacular education have allegedly been reneged by both states, yet refugees were proud to be born in Holy Orissa/Odisha; non-native language instruction is making them socially backward; West Bengal’s Communist-Marxist Chief Minister Jyoti Basu’s mass killing of Dandakaranya’s Hindu oppressed-caste poor peasants who sought refuge at MarichJhapi island of costal Sundarbans Forest area when a few of their struggling families returned and settled in the state of West Bengal; non-fulfillment of rehabilitation promises; Maoist Communist’s divisive communalism resulting in Bengali, tribe, Oriya polarization. (There have been many Bengali-Oriya, Bengali-tribal, privileged-oppressed inter-caste caste marriages that all communities gladly accepted); and more. Refugees are acutely aware of their rebirth at Dandakaranya after the mass killing in their ancestral Bangladesh home. Still people frequently asked, “What would have happened if we stayed back in our homeland in Bangladesh – life or death?” Knowing anti-Hindu pogroms and apartheid in Bangladesh I could not answer that question, but one resident summarized: “It was God’s wish that we were to be reborn – have punarjanma – in this God’s land of beauty and wealth called Dandakaranya.”

June 2008
From a publication in India
Posted by Empire's Last Casualty at 12:55 PM

My name is Sonjib, son of Mr Mukul Mukhopadhyay. I spent my childhood at Koraput between '61 and '69. Shankar Jethu was very near and dear to our family. My parents are now in Ahmedabad and I am at Bangalore. Would very much like to get reconnected with you all. My e mail sonjibm@gmail.com. My parents would be very happy to be back in touch with the family. Do please connect when you see this post. Meanwhile, warmly always... Sonjib

I was brought up in Dandakaranya Project and had spent 30 years of my life b4 moving out.As part of my job, I keep revisiting the place. My father was a part of the rehabilitation project and had a very close and face to face relations with the uprooted refugee population resttled in the villages of different Zones of DNK project. As a child I had known Dr. Ghosh Dastidar and besides being the doctor he was also a family friend. Though, I have no recollection of his brother. I must tell, the post is terribly inaccurate as far as facts are concerned and also heavily loaded with personal opinions which are not necessarily correct appreciation of facts. Amlanjyoti Majumdar

Sir now any office of DNK project is there in Odisha

Sir now any office of DNK project in Odisha

Would like to know more on citizenship issue of people rehabilitated in dandakaranya. Can you throw some light?