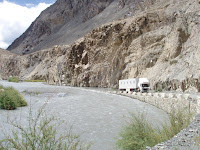 
In late 1960’s and early 1970s China planned to build Karakoram Highway to connect China with Pakistan articles appeared in the New York Times about the project. After China took over Tibet, then went on a war with India in 1962 and took over parts of Ladakh in eastern Kashmir they planned this route to form an anti-India axis in the region. They followed an old Southern Silk Route that connected China via Kashi (Kashgar) with India via the high Khunjerab Pass. The pass is around 16,000 feet high. Ever since I saw those beautiful pictures I wanted to visit, however, in those days neither China nor Pakistan was giving visa – much less with someone with Indian heritage, and I did not have resources to go there. Yet, every time I would read articles about that route I would reread those articles and saved those as if I would actually make that trip.


As I was planning this trip in my mind – which I knew will be long and arduous – many friends gave many other ideas, and a few of those got roped in those trip. One of the first acts was to convince my wife Shefali to join with me. Then Dr. Bangash, a top official of Peshawar University whom I met in the U.S. invited us to present a paper at their upcoming 150th Anniversary seminar of the First War of Indian Independence, and stay with them at the Conference site. Then we planned to cross India-Pakistan border via Wagha-Atari that we couldn’t do in our earlier trips. And then our Indian Bengali Communist friends suggested that we experience the “wonderful” example of “self-determination” and “saving of indigenous cultures” in China through their “autonomous” regions (as compared to rotten examples of India.) Thus Inner Mongolia was added to our itinerary – Xingjian was to be another one anyway as we will be traveling through that province. And then our Chinese friends suggested that we must visit Xian, a beautiful city, ancient capital for 1,400 years and, most famously, home of the Terracotta Warriors just discovered in the 1970s. To this I had to add the 3-day train journey from Xian to Urumqi in Xingjian.


(As planned we visited Inner Mongolia where we were challenged by communist lies as told to us in India as we did not find any traces of Mongols or their culture except in distant places where they were taking tourists on horseback rides. One young Mongol who spoke English told us as matter-of-factly that in 1948 when China “took us over” we were 95% of the population, however, after colonization we are now only 5%. At official buildings there are bilingual signs – Mandarin and Mongol, but no one in the largest city of Hohhot knew Mongol. Mongol’s plight was not that different from Uighurs in Xingjian until we reached the remote Kashgar where we saw some Uighurs and Kirghiz.)


Karakoram part of the journey began in Kashgar. We took a Chinese bus at the bus station. (Depending on the day buses are fun either by the Chinese or Pakistan governments.) The bus was full of Pakistani men who went to Kashgar to buy goods and bring back for sale in Pakistan. Except for us there were two foreign couples, one Chinese but the woman was party covered, and another Dutch couple who were cycling around but were denied permission to cycle to cross Khunjerab. They had to put their bicycles on top of the bus, as were most of our luggage. The scenery was spectacular from the start. From a relatively flat plateau the road rose to higher heights and the distant mountains seemed to change colors at ease, at times covered with snow even in August heat, at times we were close to melting glaciers only by a few hundred feet. Our bus stopped at a hotel at Tashkurgan a small Uighur village lined with pine and eucalyptus trees, 425 kilometers south of Kashgar. Our Pakistani friends told us where to find Indian food served by Pakistani restaurant owners. (The night before we tried local food in a not-so-upscale restaurant at Kashgar but felt its consequence immediately. Whereas when we needed the help of a local dentist the female Uighur dentist didn’t know a word of English but was excellent in healing.) Next morning the bus took us though some of the uninhabitable-yet-picturesque lands of the world to the Chinese customs and immigration office several kilometers from the Kashmir border. On occasion there were yurts visible at a distance where a lonely family was lived miles away from another family. The bus stopped after a few hours for pit stop as well as where the local non-Chinese residents were selling their handicrafts.


At a high point dividing the two countries the bus stopped for picture taking (as well as for open air bathroom break.) The road also transformed from a sleek well-maintained left hand drive road to not-so-sleek road right hand drive, and entered the Karakoram National Park of Pakistan and entered Baltistan-Hunza area of Gilgit region of Pakistani Kashmir, now known as Northern Areas. After some time the bus came to a screeching halt, and the Chinese bus driver told the passengers that the bus can’t go further as the road has gone under water because of heavy snow melt. All the luggage were unloaded from the roof of the bus. Soon one of the Pakistani travelers came to us “BhaiSab and Bhabi, brother and sister-in-law, you just have to climb the mountain and go to the other side and a Pakistani bus is waiting to take you to Gilgit.” After our trouble with food poisoning at Kashgar, and fasting for the entire day to avoid complication while going through the high mountains, Shefali refused to go further, and said that she wants to go back and fly home. Soon she realized that wasn’t possible as we were four days from the closest airport. But the real problem was carrying our luggage at that height over a mountain that was another several feet high for two fasting people. Then came a lean young man saying, “Uncle let me carry your two (carryon-type) boxes,” but confessed that “normally we may charge a hundred or two rupees but today’s rate is a thousand rupees. I am actually a college student but this I am doing as a summer job.” So he carried our precious belongings over the mountain and vanished. Our problem began carrying ourselves over the mountain. As soon as I climbed 50 feet I had an asthma attack in that altitude with thin air. Our Pakistani co-travelers were eager to help us, wanted practically to carry us. They insisted that we give them the backpack we were carrying to lighten our load. We don’t know how we got to the other side, but we did. Passengers saved the last two seats for us. As soon as we arrived all the travelers cheered and new bus left for the next destination, Sost. At that stop the park ranger came to take park entrance fee from foreigners, but not looking like foreigners, we were asked not to pay. After about an hour or two we came to Sost for customs and immigration, 75 kilometers from the border. There were no letup of Mother Nature’s beauty. At every turn the color changed, but no sign of green as we were above tree line. Our bus ticket was up to Gilgit, but we stopped at Sost.


At Sost as we were waiting for other passengers to complete their immigration formalities, an angelic young man came forward and asked us in Urdu/Hindi if we want to stay in his hotel, to which Shefali said “yes.” We were more than exhausted. As there were no other guests we instantly became guests of the entire village and got tours of their homes and fields. Men and women welcomed us as “Hindustani” or Indian, not as American. This was a Shia village. No woman covered their head, and many of them worked in the fields. At the dining room all the workers were watching Hindi language 24-hour Indian channel. When ordered hot tea, all three workers came to deliver. Next morning we were at Hunza and had breakfast at the hotel owned by the King of Hunza with breathtaking view of the Karakoram Mountain. From Hunza as well as from Gilgit and points in between one can arrange trips to the mountains, hiking, fishing, skiing in winter, camping and mountain climbing. Hunza to Gilgit trip was done in a taxi with 10 to 12 travelers. The long journey was broken by several pit and tea stops. After chatting with Shefali sitting next to her the lady realized that we were “Indian” and at the last stop at Gilgit she insisted that we cancel our hotel and stay with them. Such was the reality and warmth from average Pakistani. (Although we did not stay with that stranger at Gilgit but we were forced to stay with the family of Professor Shakila Sindhu in Lahore as she canceled our hotel reservation in Lahore while we were traveling from Peshawar to Lahore by bus with them. Shakila had the advantage of carrying a cell phone and talking to her mother every few minutes. Her mother, whom we called Didi or sister, is from East Punjab, India and she was so happy to have a Hindu as their guest.) Although we continued our journey to Peshawar, Abbottabad (years later we would realize that during out tour we passed top terrorist Osama’s house,) Islamabad and Lahore, Gilgit was end of the true KKH. Gilgit is a picturesque city surrounded by mountains, yet it must have been one of the strangest sites for us as on 14th of August – which is a national holiday as the nation celebrates as the day of partition from India – there was not a single woman in the streets. At the stores when they leaned that we are “Indian” shop owners offered us hot tea or cold drink. At the government-run tourist hotel we bought varieties of posters and postcards. There too we were the only foreign guests. The salesman gave us a special break knowing that the posters will reach India. (At the Indian customs we indeed declared all the items we bought in Pakistan; no problem. They welcomed us by saying that they do not know when an “Indian” traveled from China to India via Pakistan, although we were traveling with U.S. passport. In reality it is not possible for an Indian to travel through that route as there are Pakistani restrictions for travel to Indian passport holders.) The trip through KKH was spectacular no doubt, but at times dangerous. We saw corpses of trucks or buses which fell into gorges thousands of feet deep. For a long stretch the highway followed Indus River, the mother river of Indus Civilization, once in a while only inches from barrier-less roadside edge. We wished we were able to take pictures at every turn and every bend, but, of course, the bus couldn’t stop for the views to be held in our lenses. 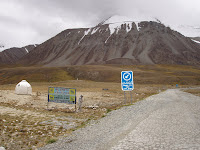 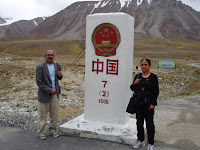 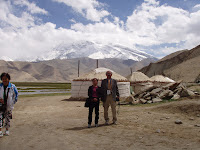 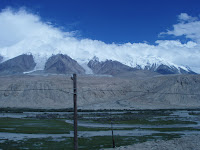 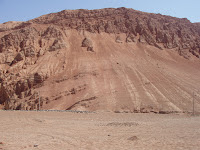 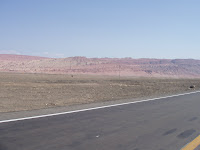 Posted by Empire's Last Casualty at 11:17 AM No comments: