In 2008 Probini Foundation of New York dedicated the Probini Foundation Girls’ Hostel building for the Andharmanik Girls’ High School at Kochua village of Bagerhart district –  formerly of Khulna district – of southwestern Bangladesh. This is a public school. It is located at one of remotest parts of the nation. It was a wonderful and joyous event attended by many students, parents and neighbors. Probini received an appeal from the school to help build a dormitory as many girls after passing junior level classes weren’t able to walk back to home, especially after dark, because of violence and oppression. As is the norm for Probini, a year back Probini Executive Secretary Mr. Shuvo G Dastidar and this writer visited the school at their own cost and time and gave a first-hand report to the Executive Committee in New York. It is so remote that on their first trip they had to travel as a passenger on a rented motor cycle, while returning on a tractor-pulled flat-bed uncovered accessory. Probini was approached by Gharami family of Kochua and presented their request at Probini’s meeting in Dhaka, the capital city of Bangladesh. In 2008 trip we took bus from Dhaka City that takes over 8 hours for the 260 kilometers or little over 200-mile trip in that evergreen riverine nation with river ferries.

In 2008 Mrs. Pratima Roy Chowdhury, of Kolkata, India, and a former teacher, Dr. Ananta Roy, a business executive of Dhaka, Hon. Rev. Monk Jiban Maharaj of Bangladesh and this writer visited the opening and dedication ceremony in Kochua. In typical Bengali style Mr. & Mrs. Anil Krishna Gharami Bidyabhusan (meaning Person Wearing the Glory of Education), an indigenous Hindu minority, founder of the school, hosted Roy Chowdhury and this writer at their traditional yet two storied thatch-roofed rural home with all modern amenities and warmth. It was a wonderful experience.

The ceremony opened with an invocation by Hindu Monk Rev. Swami Jiban Maharaj, followed by the visitors, Head Mistress Debi Rani Ghosh, Assistant Head Mistress Madhabi Gharami and many more. In typical Bengali/Indian/ Subcontinent tradition the day was declared as a day of celebration by the public school. It must be noted that swamiji must be thanked profusely for his dedication and hard work – visiting the distant place and at times camping there for weeks at his own cost and hardship when the building was being built. The project was completed in time and within the estimated cost. We thank swamiji for that.

Here are some of the pictures of that event. 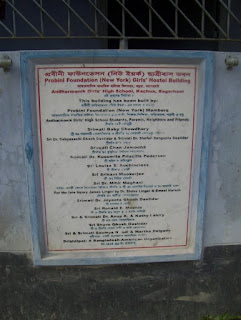 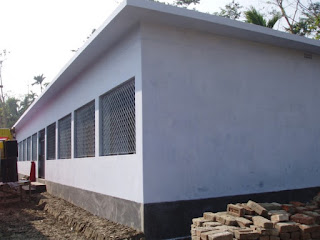 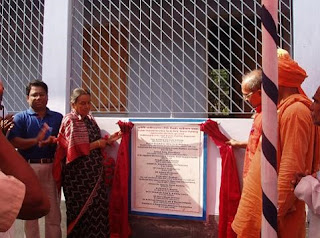 The Opening of the Donor's Plaque 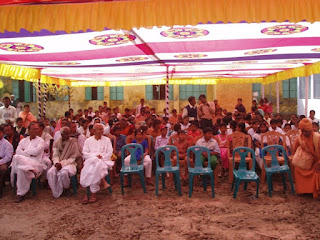 One Area of the Celebration Pandal (Covered Area) 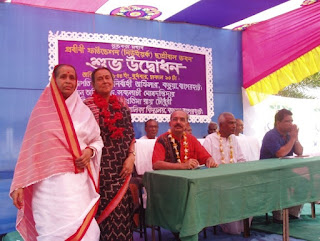