VICTIMS OF CHUKNAGAR, BANGLADESH, GENOCIDE OF MAY 20, 1971

ISPaD: PARTITION CENTER’S TRIBUTE TO THE VICTIMS OF

CHUKNAGAR, THEN KHUNA, EAST PAKISTAN, NOW BANGLADESH, HINDU GENOCIDE BY THE ARMY OF THE ISLAMIC REPUBLIC OF PAKISTAN AND ITS BENGALI ISLAMIST ALLIES OF THE 1971 BANGLADESH GENOCIDE 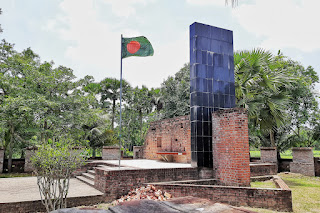 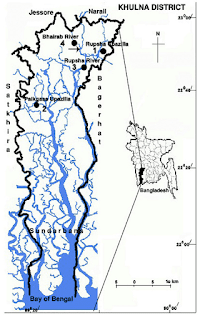 In 1971 as the Army of the Islamic Republic of Pakistan and its Islamist Bengali allies were committing a Bengali Genocide, Bengali-Hindu Genocide, and Extermination of Secular Muslims, one of the large scale killings/genocide of poor, oppressed, rural Hindus took place in Chuknagar village in Khulna district of southwest East Pakistan, now Bangladesh. People, mostly peasants, were fleeing mass killings of indigenous Hindu minority to India vis its nearby Kaliganj border crossing. But, first the fleeing residents had to cross the Bhadra River. As tens of thousands of Bengalis waited to cross Bhadra River for India border, this particular massacre took place on May 20, 1971. They were trapped the killers. Chuknagar is located in the world’s largest Ganga-Brahmaputra delta. There was hardly any place for people to flee as the massacre began. Most people estimate at least 10,000 people were killed and dumped into the river, as Pakistan Army and it Bengali Islamist supporters did throughout the deltaic nation. One firsthand witnessed of such dumping of Hindu bodies in river was Dr. Thomas Dulu Roy as he told to this writer/interviewer which can be found on ispad1947 channel of YouTube, but at a different river crossing. There are others who believe the number of people killed may be two or three times higher. One young girl who fled through Chuknagar to the Indian border was Priya Saha. Her interview almost 50 years later is available on ispad1947 channel of YouTube.

Sadly, there are many defenders of genocide. No one has been prosecuted for this crime. Not a single Muslim-majority nation condemned this and other 1971 killings, and asked for prosecution of the killers. Some Western and Islamic nations gave asylum to many of these killers. Request by Bangladesh for repatriation of killers have been denied. Even U.S. Nixon-Kissinger Administration supported the genocide and sent U.S. 5th Fleet to the Bay of Bengal to prevent Indian Government of Mrs. Indira Gandhi to help liberate Bangladesh from Islamic Republic of Pakistan’s genocide.

May 20, 2022 Commemoration in Washington D.C. led by Human Rights Committee for Bangladesh Minorities 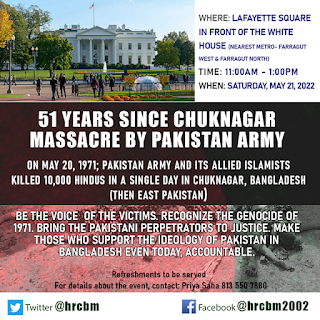 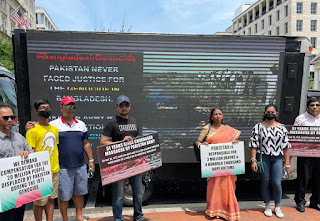 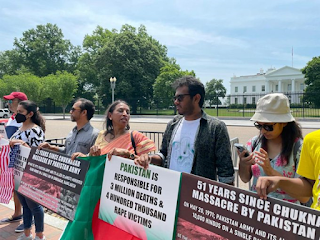 Mr. Tanveer Mokammel, a noted human rights activist, movie and documentary film maker has saved many of the historical documents of our oppression, including Chuknagar genocide. Here is the link to his documentary:
https://m.facebook.com/story.php?story_fbid=3202410810006246&id=100007120750774&sfnsn=mo 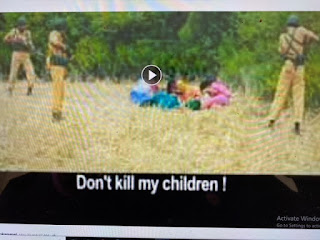 This is Mokammel’s on May 20, 2022 commemoration, with others, of the genocide,  at Chuknagar. 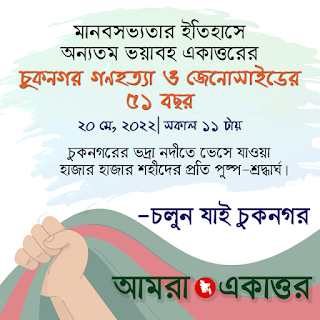 Chuknagar genocide is available at many sources. Here are sample remembrances:

Shake it, by all means; take all lawful steps to bring the guilty to book. Today is ALSO the anniversary of the MASS MURDER OF 10,000 HINDUS at Chuknagar,Distt Khulna,now Bangladesh, by the Pakistani Army and Bengali Muslim Razakars on 20 May,1971. Shed a few tears for them, too!

Today marks 51 years since the #ChuknagarMassacre took place in Bangladesh which allegedly left 10,000 dead. Bengali Hindus were the main targets. Remembering history is one of the best ways to prevent it from repeating itself.

The Chuknagar Memorial, which was built in memory of victims of Chuknagar massacres in Dumuria of Khulna Dhaka Tribune

This year, ‘Chuknagar Smrity Rakkha Parisad’ has suspended all programs to commemorate the day due to coronavirus situation and cyclone Amphan

The Chuknagar massacre took place on May 20 when a Pakistan army contingent and their local cohorts – paramilitary razakars - unleashed an unbelievable terror on a sleepy rural hamlet in Khulna’s Dhumuria upazila.

On the day in 1971, not least than 10,000 people including men, women and children mostly belonging to Hindu community were slain by the Pakistani military and their collaborators. The forces sprayed bullets on them in broad daylight from light machine guns and semi-automatic rifles killing them on the spot within hours. The victims of the massacre hailed from Khulna, Bagerhat, Satkhira, Jessore and Gopalganj districts. They had assembled at Chuknagar, a small frontier business town under Dumuria upazila of Khulna district to flee to India through any available border route.

An eyewitness to the massacre ABM Shafiqul Islam, currently the president of ‘Gonohatya ’71 Smrity Raksha Parishad’ (Genocide ’71 Society to Save the History) and former Principal of Chuknagar College said “There were bodies over bodies, numerous bodies. I did not get any room to step out evading the blood-stained bodies.

That must be the biggest genocide in world history as Pakistani military and their collaborators killed thousands in a few minutes on that day.”

Abdul Haque, who was a student at that time, said: “I was looking for my father at Dibya Rural Secondary School beside the Bhadra River just after the massacre.”

He said there were bodies everywhere and the tide of blood was falling into the river.

“I briefly halted at one place when I saw a female baby was trying to have milk from her deceased mother’s breast. I was shouting and crying. I would not forget this seen in my life,” he said with tearful eyes.

There was no official statistics about how many people were killed in Chuknagar but most witnesses said the figure would be over 10,000 as 1971 veteran and freedom fighters’ commander SM Babar Ali gave an account of the incident in his “Swadhinatar Durjoy Abhijan” (Independence’s Dreadful March).

Professor Muntasir Mamun in his research on the massacre and edited a book—Chuknagar Gonohatya ’71 (Genocide at Chuknagar in 1971) said, “At around 10am two trucks carrying Pakistani troops arrived at Kautala then known as Patkhola. The Pakistani troops were not many in number, most possibly a platoon or so. As soon as the trucks stopped, the Pakistani troops alighted carrying light machine guns (LMGs) and semi-automatic rifles and opened fire on the public. Within a few minutes, a lively town turned into a city of death.

Prof Muntasir Mamun mentioned this genocide as the biggest genocide in the country during the liberation war.

Major (retd) Rafiqul Islam (Bir Uttam) wrote a book over Chuknagar genocide named ‘Muktir Sopantale’ (On the Base of the Freedom).

The day’s program begins with placing wreaths at the memorial where a discussion is held on Chuknagar College premises among freedom fighters, different party leaders and relatives of martyrs.

This year, ‘Chuknagar Smrity Rakkha Parisad’ (Society to Protect Chuknagar Memory) has suspended all programs to commemorate the day due to coronavirus situation and cyclone Amphan.

We are still seeking justice for our missing families!!