Why, In Spite of Opposition from Secular Muslims and Minority Hindus?

In one more example of asset confiscation by the majority Muslims of the centuries-old land belonging to Hindu deities or mandirs (temples) in Bangladesh, this time by a leader of the ruling Awami League Party, otherwise known as the pro-secular party of Bangladesh. Confiscator this time is the mayor of the famous Narayanganj City, Dr. Selina Hayat Ivy, a Muslim. She is the first female mayor of any large city in Bangladesh. This type of illegal confiscation and ethnic cleansing for India has been going on since partition of India. 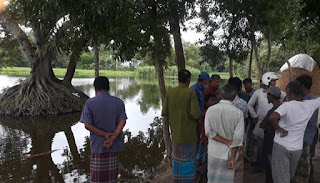 Pakistan, and its eastern wing East Pakistan continued to confiscate minority Hindu property without notice and compensation. East Pakistan became Bangladesh after 1971 Liberation War. Independent Bangladesh kept the same law with a new name, Vested Property Act. Yet, no one has ever heard any Hindu minority “vesting” their property to the state for confiscation. This law is so bigoted that Bangladesh couldn’t confiscate properties of killers of Bangladesh’s Founding Father Mujibur Rahman and 26 members of his family, as the killers were Muslim. (Killers were sheltered in Europe, North America and Muslim-majority nations.)

(It is worth mentioning here that once Pakistan was created by the Colonial Britain through its divide-and-rule policy, Pakistan declared herself as an Islamic Nation with official discrimination against her pre-Islam indigenous Hindu, Jain, Buddhist natives, as well as against her Sikh minority. The nation’s Constitution prohibits any Hindu, Jain, Buddhist, Sikh and Christian from holding many top offices. Yet, no democratic, communist, Islamic or Christian nation, secular, religious progressive or conservative organization said a word against such bigotry.)

Dr. Barkat’s book discovered that by late 1990s the amount of Hindu land confiscated without notice and without compensation was about 88% of Bangladesh GDP. About two-thirds of the land was confiscated by the pro-secular party workers. The party was overwhelmingly supported by the oppressed Hindu minority. Contradiction and confusion? Of course. Another 30% was confiscated by the pro-Islamist party, and the rest by the vehemently racist, anti-independence Islamist party.

What has world’s free press, progressives and conservatives, and the Leftist rulers of Indian states of West Bengal and Tripura – almost all political leaders are Bangladeshi Hindu refugee in India – done? Nothing. Not even saying a word while calling for nationwide strikes in India for fake or real oppression in faraway land not known to the strikers.

It is worth mentioning that life for lawyer Rakshit, a Hindu, and professor Dr. Barkat, a Muslim, has not been easy. This is also true for other secular Muslims and Hindus who protest atrocities against their Hindu minority. Mr. Rakshit’s very talented son Srikant, a topper in school and college, was beheaded by a politician as the family didn’t give up their ancestral land of hundreds of years and their home of many centuries in Chittagong. (In early 2000s this writer pushed the pro-Islamist Prime Minister who then tried some of the killers giving tough sentences, though not the politician. Srikanta never came back! See this writer’s Living among the Believers: Stories from the Holy Land down the Ganges, Firma KLM Publishers, Kolkata, 2006, for the story called “Srikanta.”)

In late 1980s this writer met with the Bangladesh Land Minister, and the Minister of Religion in the capital city of Dhaka during the military rule of President General Ershad, an Indian-Bangladeshi. The land minister mentioned that over 1.5 million acres were confiscated recently from Hindus, and that the General was trying to disband the Enemy Property Act. It didn’t happen during his rule. (See "Bangladesh and West Bengal: Glimpses of Government Policies: Third in a Series", in South Asia Forum Quarterly, Spring 1990; 7-8.)

Here is the story of temple land confiscation that major papers of Bangladesh, West Bengal, India and the U.S. censored. 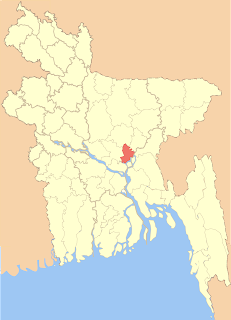 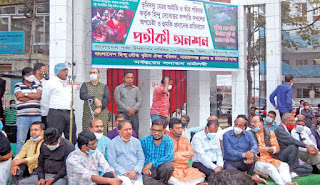 Hindus Stage Hunger Strike nar on Wednesday in protest against grabbing of their land by some local influential people. —sun photo

Several thousand people from the Hindu community staged a token hunger strike in Narayanganj city on Wednesday in protest against the alleged grabbing of their ‘debottar’ property by Mayor Selina Hayat Ivy and her family members.

Under the banner of the District and Metropolitan Puja Celebration Parishad, the Hindu, Buddhist and Christian Unity Parishad and Civil Society, the protesters thronged Shaheed Minar at Chashara in the city.

Earlier on November 11, the protesters gave a memorandum to Prime Minister Sheikh Hasina after holding a protest progarmme.

He also said Ivy has forgotten that Awami League is for the people and Prime Minister Sheikh Hasina is the last shelter of the people. Ivy must stand trial in the court of justice. It is painful for us to come down to the field against the ‘grabbing’ of a temple’s property.

Advocate Khokon Saha, general secretary of the Narayanganj City Awami League, said, “I have never had to face communalism in my political and professional responsibilities.”

Expressing solidarity with the strike, Advocate Mohsin Mia, president of Narayanganj District Lawyers' Association, said the British pamphlet mentions this property as Debottar. Debottar property is not eligible for sale or transfer even under customary law or Hindu law.

“We’ve decided at a meeting of the District Bar Association that if they ask for our help, we will stand by them and provide legal aid,” he added.

Convener of the City Jatiya Party and Bandar Upazila Vice-Chairman Sanaullah Sanu said, “Mayor Ivy did not allow the heroic children (freedom fighters) of the nation to perform at the Shaheed Minar on the pretext of getting permission.”

“Today, he is accused of grabbing temple property. We strongly condemn it and we will resist it,” he added.

Chandan Shil, the district president of Ekattorer Ghatak Dalal Nirmul Committee, said, “Those who grab properties of temples and a mosque-madrasas are not fit to live in this Narayanganj. They will be thrown in a trash soon.”

“Mayor Ivy's mother, two brothers, uncle, aunt and relatives are among those who are trying to grab the property through fake documents.”

During the vote, Ivy went to the temple to show herself as a person close to the Hindu community. Now, her family members are trying to grab the temple's property, they said.

Earlier, Mayor Ivy’s father, late Ali Ahmed Chunkao, became the leader of the Awami League and used to bring Delwar Hossain Sayedee to the meeting during the tenure of Ziaur Rahman. War criminal Ali Ahsan Mujahid was the principal of Adarsha School and Chunkao grabbed and sold the school’s land to Jamaat leaders.

Some of the comments sent directly by email:

This is just terrible news! Is there no justice?
What is the solution I wonder?
Ms. M. Talukdar
12/16/2020
Thanks v much. The point is how to get them back to the real owners.
S, Mukherji
12/16/2020
As always, professor, thank you. ....... The key to further advances is good information, vetted according to exacting standards, which articles like this help provide.

During a 2015 summer trip to Poland we visited the infamous Nazi Treblinka (Extermination) Camp in Poland, a short distance from beautiful Warsaw, the capital of Poland.  At the Treblinka Museum we met a Roma employee who presented us with copies of Polish Roma journal. Roma are also known as Gypsy. Roma’s were also targeted for extermination by Nazis for their Indian ancestry. 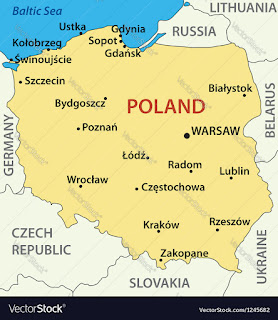 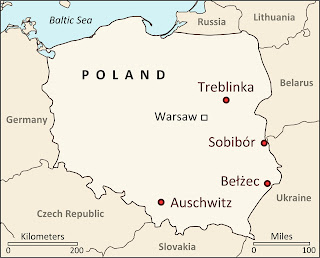 Interestingly many Roma in Europe are increasingly identifying with India and Indian culture, teaching Hindi in Roma schools, adapting Indian outfit on joyous occasions, and for Polish Roma flag it has resemblance with Indian tricolor  and chakra [a spiked-wheel] in the center as with Indian flag’s Ashok Chakra. 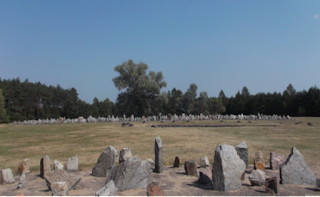 The infamous Treblinka Nazi Death Camp is a 2-plus hour drive northwest of the capital Warsaw. In the midst of the sorrowful atrocity we witnessed several examples of hope and generosity. Busloads of Jews – young and old – from faraway places were walking miles after miles though the remains of the sprawling camp. They were placing flowers and stones at memorials to the families with whom they share only their faith. Gauging the suffering in Treblinka is impossible. Yet it is praiseworthy for the visitors' sincere efforts. One visiting Jewish couple who was spending three weeks going from village to village where large numbers of Polish Jews lived before Holocaust. Seeing us in our Indian outfit that couple asked, “Are you Indian?” “Hindu?”

We replied yes to both.

Then they asked, “What are you doing here?”

We replied, “Like you we too have come to pay respect to the fallen and ask the Mother Goddess for nirvana of their soul. Now we are also praying for return of Black Mother Kali, the demon killer, on Earth to destroy the demons forever.” We added “weren’t there Indians called Roma or Gypsy who were murdered here too?”

They replied, “Of course. Please go to that area for more memorials,” pointing towards an area. 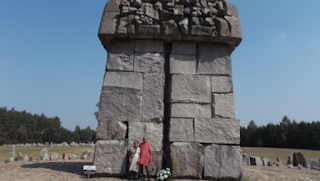 We walked for hours through the camp, which in size is like a small town, in that 100+F hot summer day, finally entering the Museum. We were inspired by the museum as we are trying to establish a Indian Subcontinent Partition Documentation Museum on the effects of British-inspired, Muslim League Party-proposed and Congress Party-agreed Indian partition of 1947 resulting in the creation of the Republic of India and the Islamic Republic of Pakistan with millions killed because of partition and tens of millions were cleansed. The Subcontinent was further partitioned in 1971 when the majority of Muslim Pakistan, the Bengali, who revolted against oppression by the minority Punjabi of then West Pakistan. Three million Bengalis – mostly from the minority Hindu community and the rest secular Muslims – were killed in nine months by the Army of the Islamic Republic of Pakistan and its Bengali Islamist allies giving birth to Bangladesh. As we were going through Roma items at the Treblinka Museum one Roma lady handed us a copies of “Romano Atmo” journal. Hesitatingly we picked up a journal of which the pictures attracted our eyes as we didn’t understand Polish language. Soon we picked up a second and a third issue. We were exceedingly impressed by the small, oppressed, poor, minority Roma in its effort to preserve their Indian heritage and stories of Nazi killing. It was reveling to us, even the Roma flag had symbolism of the tricolor Indian National Flag, along with the wheel of Buddhist King Asoka. Picture 3: Model of the Extermination Camp

Onslaught on linguistic and religious minorities continued for centuries with the dreadful culmination of Nazism with attempts of complete annihilation of Jewish and Roma identities. 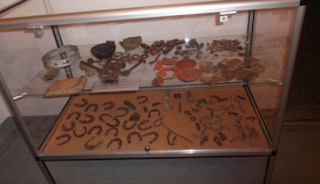 Picture 4: Objects found at the Camp

We were told that Treblinka was one of the few Death Camps that the Nazis were able to destroy before Allied Forces liberated it. Thus mostly the fields remained, not buildings. Here is a foundation of a building. 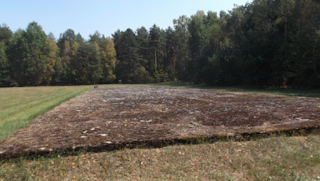 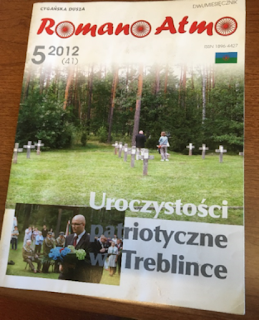