SPIRITUAL UPLIFT IN BANGLADESH AMONG THE POOR AND THE OPPRESSED

AMONG THE POOR AND THE OPPRESSED

IN THE MIDST OF IMMENSE DIFFICULTY 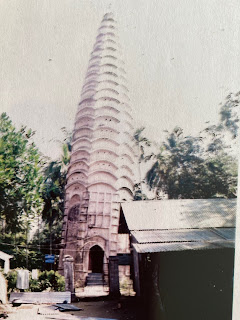 On March 19, 2022, the important day of my son’s birthday, I got a thrilling call from the dirt-poor monk of Mahilara Mott ashram telling me that "I have never seen such a sea of humanity with thousands and thousands of people during our Shiv Ratri festivities (two weeks ago), of Lord Shiva. People came from all over, then toured the newly built Mita Banerjee School offering water and durba grass at Shiva Shrine (a traditional way of showing respect.) This was unbelievable, so I called you. I still can’t believe my eyes." The monk is so poor that he had to call from a paid telephone booth, having no access to cell phone with free web connections. 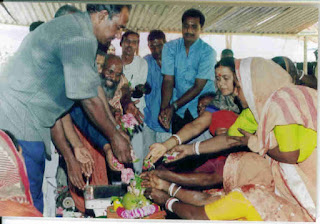 For us this is unbelievable too. We first thought of the project in 1990s when the 350-yeat old beautiful temple came under attack during 1990 and 1992 pogroms.

In 1996 ten individuals  - Bangladeshi, Bangladeshi-Indian-Hindu-Refugee-Indian-Americans, Bangladeshi-American, American - and one group came to help whose names are inscribed on a tablet, and that became our model for helping the poor, the orphaned, and the very poor. 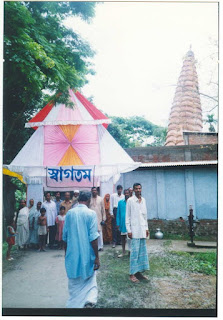 Opening Ceremony in the Summer of 2001: Swagatam or Welcome

This is the place where we have built Nihar Kana Bhaktabash O Bidyaloi, NIhar Kana Shelter for Devotees and School, and where we just opened Mita Banerjee School. Mita Banerjee is a Bangladeshi-Indian-American-Hindu-Refugee-American and Nihar Kana is the name of my mother and mother-in-law, who had to leave their ancestral homes during pogroms. 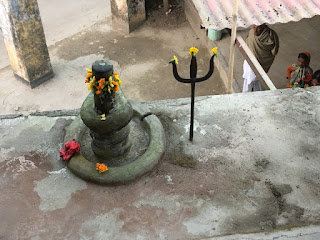 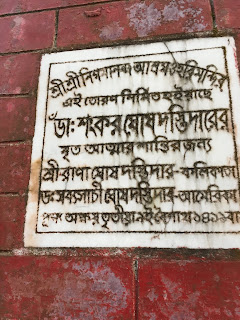 We brought back Ma, Nihar Kana, and Dada, Older Brother, Sankar, back to their homeland. This is where the Shiv statue sits on Ma's ashes on the first-floor roof, and at the ground floor is Dada's memorial on top of his ashes where devotees offered prayer as well. 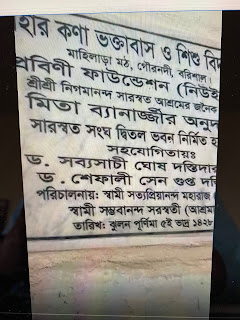 A short video sent by a local resident:

Immediately after opening in 2001 summer, the mott (hermitage) came under attack when a new government came to power. To protest Dastidar family flew/traveled to Gour Nodi Circuit House in Barisal District to meet with the winning parliamentarian who drove the monk out of the shrine, and didn't allow any minority to vote. He said it won't happen again. Then I met at the U.S. Embassy in Dhaka to protest their false reporting. They said they will report correctly.

Sadhu's call completed a full circle of believing in work, as we merged with ISPaD, The Indian Subcontinent Partition Documentation Project. We thank Mita again in helping the poor.  Transformation of the place we never dreamed of.

Swapna, PrabalDa, and Mita were extremely helpful in sending funds to Mahilara, and during 2021 Durga Puja pogrom when many sent relief to the victims.

Mahilara Mott is now included in a book by UNESCO, and their visitor’s book includes names of many important individuals including ambassadors from America, Europe, Africa, and Asia. 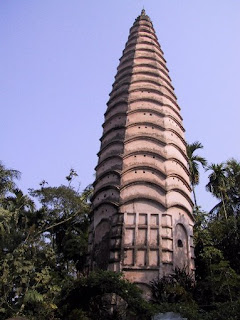 Posted by Empire's Last Casualty at 1:30 PM No comments: