One of the first capital project that Probini Foundation was able to complete was a boys’ hostel at Pranab Ashram in Madaripur City of lower Bangladesh, south of the huge Padma River that is still connected only by river ferries. In the near future a bridge will connect the lower deltaic – world’s largest delta – Bangladesh with rest of the country.

Pranab Ashram and its boys’ dormitory are historic places in the Subcontinental. It was established by a 19th Century Hindu monk Swami Pranavananda whose main goal was to educated the entire population of India, including today’s Bangladesh, irrespective of religion, income, or gender, and to free the nation of British colonial oppression. The indigenous family had its home in nearby Bajitpur village for many generations, and established his first hostel in Pathak Kandi neighborhood of Madaripur City, at its present site. He established the dorm in 1917. Swami was imprisoned several times by British colonial oppressors for his fight for India’s independence.

After Probini-supporters built its first building in the historic village of Mahilara, about 38 kilometers south of Madaripur City, word spread quickly throughout the region for Probini’s work, and on Mahilara’s opening day in the summer of 2001, a monk from Madaripur ashram came to bless the occasion. https://empireslastcasualty.blogspot.com/2008/12/saving-of-300-year-old-mahilara-mott.html and https://empireslastcasualty.blogspot.com/2019/01/mahilara-gour-nodi-barisal-bangladesh.html. (The pride of 9/11 destruction brought a pro-Islamist to power in Bangladesh immediately after the event with attack on the Mahilara building. However, the building was not damaged, and no one was hurt, but some had to flee from the village for some time.)Soon the hard working monk developed contacts with Probini Foundation in New York to help rebuild the dormitory. The original hostel was built by Swami Pranavananda in 1917. The genocidal Army of Islamic Republic of Pakistan and its local Bengali Islamists thugs destroyed the property. When this writer arrived to visit the ashram on behalf of Probini in early 2000s, the entire ashram with prayer hall, temple, living quarters for monks and the poor, kitchen, the student dorm and more were destroyed, and a Muslim family built an illegal two-story building on the Hindu temple's property. There were attempts to confiscate the land that belonged to the ashram. After presentation of the firsthand report, Probini Board in New York approved rebuilding of the dormitory. Probini’s fundraising effort was helped by a Hispanic student organization of the State University of New York at Old Westbury, a student Jonathan Patrick Buchanan who donated all the money gifted to him for his college graduation, and a faculty Eloise Linger of the same campus, as well as several well-wishers of Metropolitan New York City who donated funds, including this writer's family. Their names are engraved on a tablet at the hostel. This writer with Dr. Shefali S. Dastidar of New York were invited to lay the foundation stone of the new dormitory, and with monk Maharaj’s skill and our effort, we were able to impress Bangladesh administration to remove the illegal home. 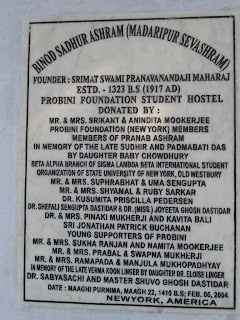 Looking back, it seems like a miracle that in mid-1980s when a minority Hindu monk of Pranab Ashram’s headquarter at Bajitpur, Madaripur District of Bangladesh was brutally murdered at Bajitpur Ashram, for unknown reason Pranab Ashram of Bajitpur reached out to this writer that was really baffling. Still 35-years later it is not clear why the ashram reached out to me as I was nobody in my homeland. They shared their pain. At that time our little kids were attending Nassau County Bangla Pathshala – a free Sunday morning school for language and culture, on Long Island, New York, when several parents hearing the atrocity donated small amounts of money each to Pranab Ashram for the monk’s sraddha last rites ritual. This writer forwarded the checks to Banjtpur. Shockingly, seeing donor checks from minority families, the local bank at Bajitpur refused to accept the checks. This writer’s challenge by phone with the bank manager solved the problem. Later on I visited the Bajitpur Ashram in 1980s and offered my gratitude to the founder monk Pravananda. This is an important place to visit. 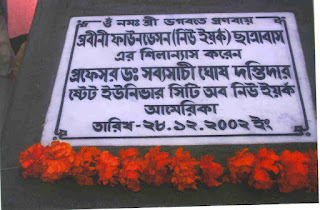 
Visit to Madaripur Ashram: In the last two decades, the entire ashram area has gone through revolutionary positive change, that locals tell us. Probini has built a second hostel, and a third one is in the process of completion. The ashram was able to build a wall around its property stopping attempts of illegal land grab. Ashram has built a new temple, and very important for this writer, has built a guest quarter, and a workers' residence and more. Thus when we visit Madaripur, my family or I don’t have to worry about a place to stay at a modest cost, and with wonderful Bengali/Indian food service at a good price. The ashram is also able find reliable car rental that allowed my family to visit many places in evergreen, picturesque Bangladesh in a short time which otherwise would have cost many days of travel in rural Bangladesh with many river ferries with no residential hotels. I welcome all travelers to take the advantage of Madaripur Ashram’s guest space, location, tourist connections, car rental and more. Monk Maharaj has also arranged for day trips and walking tours to nearby areas with local guides for a modest cost. https://empireslastcasualty.blogspot.com/2019/01/rest-relaxation-and-regeneration-in.html, https://empireslastcasualty.blogspot.com/2019/01/maadaripur-ashram-boys-hostel-turning.html, https://empireslastcasualty.blogspot.com/2019/01/the-barisal-barishal-airport-bangladesh.html. Please check the blog for more information. If one wants to help build new schools and hostels for the poor and the orphaned, please donate via www.probini.org, or through www.ispad1947.org. These two are tax-exempt, not-for-profit organization in the U.S. Soon, Probini will be merged with ISPaD and will continue its developmental work via ISPaD. 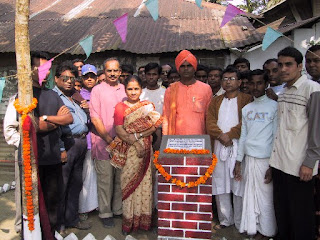 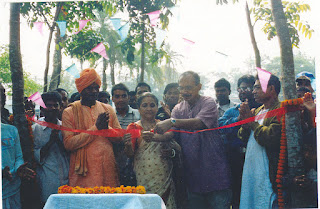 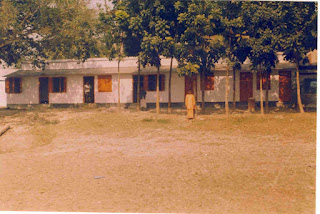 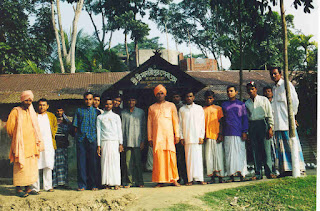 The Old Destroyed Building on the Back 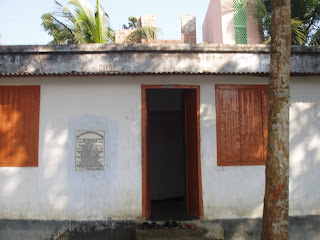 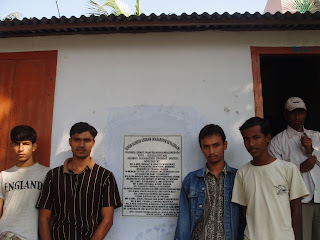 Students Posing Next to the Donor Tablet 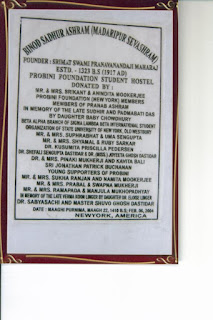 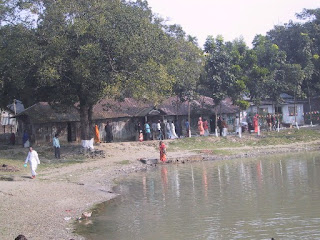 Ashram Property Almost on the Brink of Illegal Confiscation 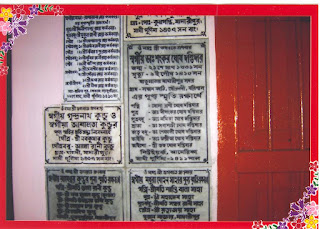 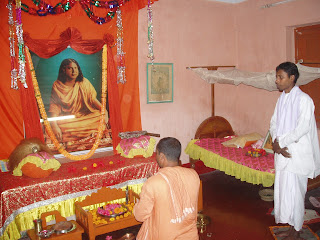 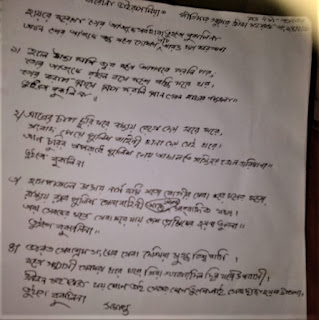 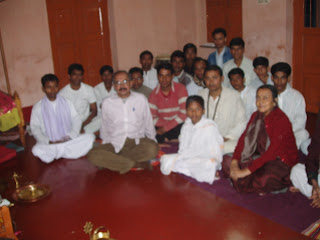 During a Visit to the Ashram with Mrs. Pratima Roy Chowdhury and Hostel Students 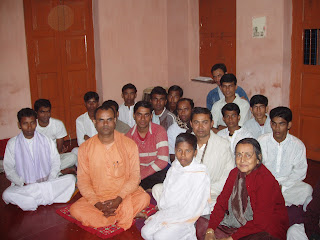 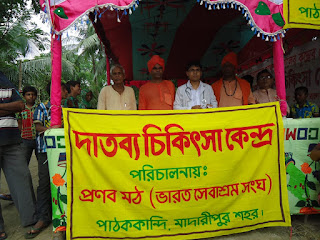 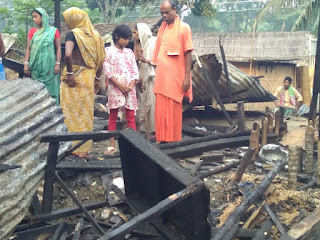 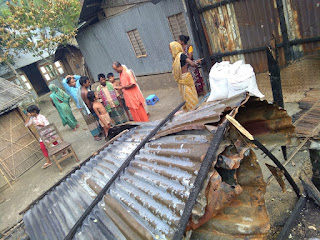 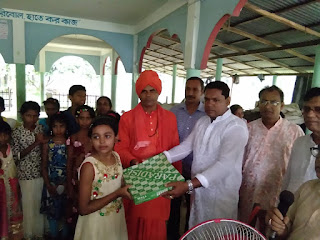 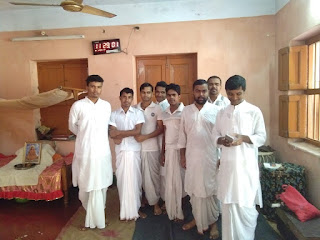 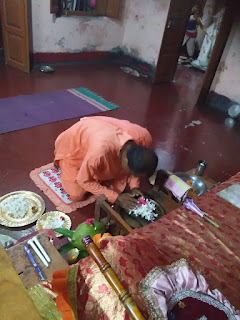 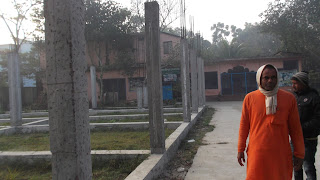 A New Hostel and Meeting Space is Coming Up Soon

Monk Swamiji is working hard with many local citizens to establish a perpetual Nihar Kana Ghosh Chatrabritti Centenary Award scholarship at Donovan Girls’ High School of Madaripur City in honor of this writer’s mother who stood first in the region Chatrabritti School Exam in 1919 while studying at newly started Donovan Girls School. She received a congratulatory letter from then British Governor General and a Gold Medal in the name of a prominent Bengali family, C. Chatterji, Bar-At-Law. Covid crisis and school lock down has delayed the Centenary celebration event. 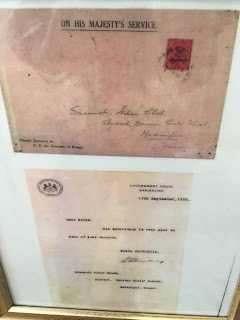 Posted by Empire's Last Casualty at 8:09 AM No comments: