On March 23, 2016 Bangladeshis celebrated Dole-Jatra with gusto which is also known as Holi, Fagwa and Spring Festival of Colors ushering in the season of spring. In joyous celebration colored power known as aabir is smeared in faces, and colored water sprayed on friends with water guns. Although this was a region-wide festival with partition of Bengal in 1947 and the rise of intolerance towards non-Muslim minorities, public celebration of this festival almost came to a halt as some called this “Hindu Festival.” There are many stories and beliefs behind this thousands-of-year old tradition including that this smearing stops spread of many spring diseases in that tropical atmosphere.

In 1990s several groups expressed their desire to restart this festival in their ashrams except for their lack of funds. To that this writer promised to help them should they need that.

Here are a few pictures from Bangladeshi dailies Bhorer Kagoj and Prothom Alo. 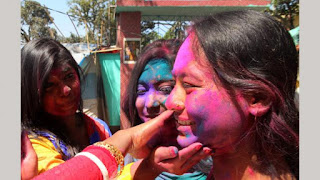 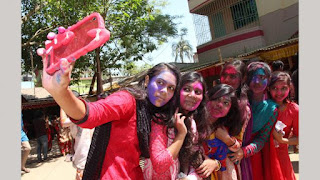 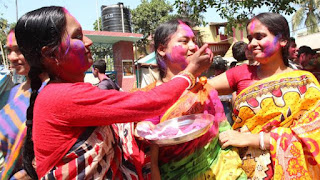 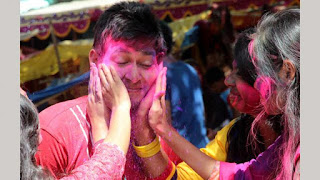 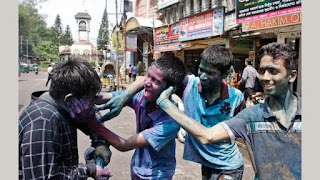 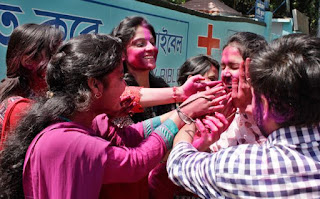 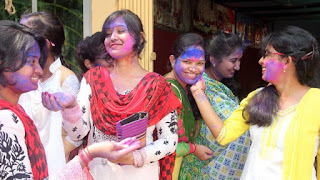 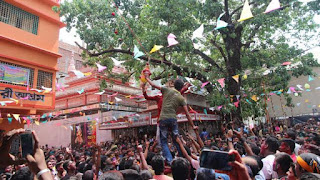 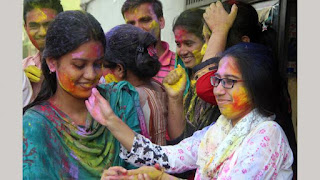 Posted by Empire's Last Casualty at 2:40 PM No comments: 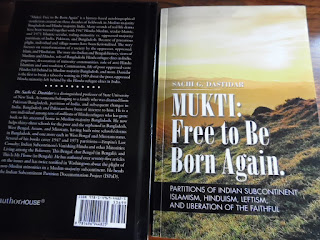 Reading from Dr. Sachi Dastidar’s nonfiction book “Mukti” held today was a monumental occasion for history. The event was held in the conference meeting area of The Indian Subcontinent Partition Documentation (ISPaD) Project. Those who attended were impressed by some of stories told.  Stories, Indian and Bengali, which are actually narratives, depict a society that has sidelined all inhibitions towards any pain, fear, war, and hatred directed at one’s neighbor - literally. Prejudice and impartiality runs side-by-side, is a serious contradiction of the society. Too many parts of society have also moved to eliminate choices as the society, mostly through harmful acts and violations of human rights, moves to become a religious region by force. Dr. Dastidar succinctly explains to readers the background and mobilizing factors that propelled his authorship forward and completion of a book/historical piece in the Preface of the book: “Mukti is a product of love and pain of at least three decades. It is a byproduct of over three decades of field work, social work and travel in the 1947 Partition-affected Bengal –Bangladesh (formerly East Pakistan), West Bengal State of India – as well in the neighboring states…….During my travel in Muslim-majority Bangladesh I have come across the term ‘mukti’ from many, especially indigenous pre-Islamic Hindu, and lately Buddhist, families as they pray for liberation from their suffering….The book is directed towards Western readers many of whom may have heard of India, yet very little is known about post-partition Muslim-majority Bangladesh and Hindu-majority West Bengal, the effects of Indian Partition on the people of the Bengali-speaking region, the former mixed Hindu-Muslim Bengal Province of Colonial British India……Yet the privileged-caste Hindu-refugee elites quickly rose to power in two Hindu Bengali-majority states in India: West Bengal and Tripura. They would champion liberal, left and Marxist ideologies but refused to show solidarity with the oppressed, mostly belonging to Hindu oppressed castes [whom they left behind]… Seeds of Mukti was first sown in early 1990s when many of my friends and associates asked for translation of my Ai Bangla, Oi Bangla (This Bengal, That Bengal.)…..The Bengal of British India was known to be a relatively-tolerant mixed Hindu-Muslim society where both Hindu and Muslim nationalism played significant role. In a surprise twist of history after Partition of Bengal and India in 1947 both Bengals took stride towards intolerant politics, one…Islamism, the other….Leftism, led by Bangladeshi (East Pakistani) Muslims and Bangladeshi (East Pakistani) Hindu, albeit refugee. The book delves into that ethos and contradiction, although politically incorrect and, at times, impolite…..I have no power to protect individuals and families who have shared their deepest feelings to my family. I have no power to protect their villages either. As a result I have not used the real names of individuals, villages and neighborhoods….” 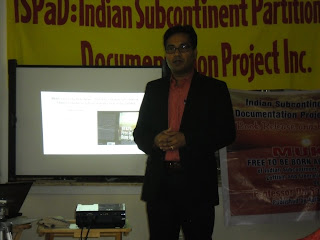 Dr. Dilip Nath introducing Mother Language Day and Sachi Dastidar
The painstaking intellectual, research (both with documents and with people), unbelievable amount of time, and most certainly emotional process that coalesced to complete this piece of work is something which truly does “blow my mind”. Mukti is a 700 page book that took over 18 years to write 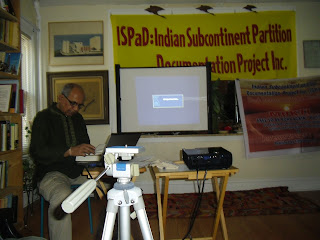 The day of the reading started out a bit slow, as was to be expected of most Bengali/Indian events – especially one in which there was a cricket match of Bangladesh vs. India. Little by little the room filled up with individuals. Dastidar was introduced by Dr. Dilip Nath and then by this writer introduced the Partition Project. Dr. Nath, in line with the Mother Language Day asked all for a moment of silence for the Language Martyrs who were killed on February 21, 1952 to defend their mother language. 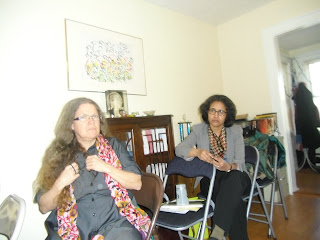 Dr. Caroline Sawyer and Ms. Anjali Sharma during Q&A
Following the introduction was the book reading portion where Dastidar selected a few passages he thought would be especially relevant to the individuals present. Mrs. Shubra Goswami graced the crowd with her beautiful voice by singing several songs. Mrs. Goswami sang traditional Bengali songs and at the request of the audience sang a song of Rabindranath Tagore. A Q&A followed the reading. After the formal event had finished all individuals introduced themselves and their special interests. AND finally all partook in the wonderful Indian food available in a wide variety in large amounts, as well as Caribbean snacks from Brooklyn provided by Mr. Jay Hyman. Most who attended also purchased one or more copies of “Mukti” and made sure that it was signed. It was a day that will be seen as a date to remember since it was the date “Mukti” was made publicly available to us and the first speaking engagement Dr. Dastidar gave for it. (Few more book readings are coming in Ozone Park, New Jersey, Albany and Long Island.) Thank you all for having supported research about the Indian Subcontinent. 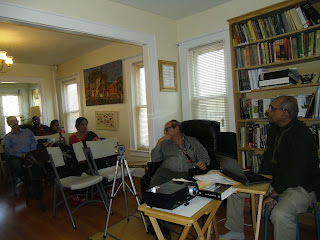 A Few of the Book Presentations at:

Posted by Empire's Last Casualty at 1:48 PM No comments:

Memoirs of Homeland: Refugees of 1947 Bengal Partition in India Release in Kolkata, India On February 20, 2016 the Indian Subcontinent Partition Documentation Project Inc. (ISPaD) New York organized a book release and book reading at the former home, now a museum, of the famous 19th -20th  Century Bengali novelist Sarat Chandra Chatterjee's at Ballyganj, south Kolkata (Calcutta.) "Memoirs of Homeland: Refugees of 1947 Bengal Partition in India", authored by Dr. Sachi G. Dastidar and this writer is published by Firma KLM of Kolkata. It is a 320-page softcover book. This book was released before the February 2016 Kolkata Book Fair. Proceeds from the sale of the book in the U.S. goes to the Partition Documentation Project of New York. 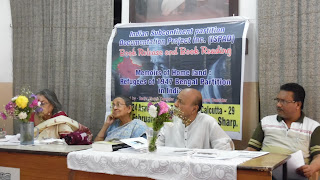 Here is a bit of explanation from the book, "Between 1982 and 1986...we decided to interview (in the U.S.) some of the refugees- Hindu and Muslim - as many of their stories were riveting to us, and now socializing with individuals from the "other" groups from whom they fled earlier....How do they feel about their homeland? Not so surprisingly, all the refugees remembers in minute detail how and when their families fled, or what made them to choose a different nationality leaving their home of their ancestors, especially for Hindus for whom the village water and soil, flower and fish, are sacred and needed for religious services. Majority of refugees were Hindus who fled from East Pakistan/East Bengal to India......Altogether there are 22 stories; 16 men and 6 women; Hindu 18 and Muslim 4." (p 14) 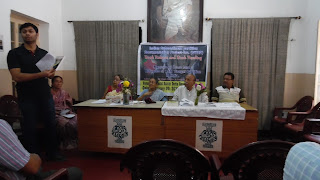 Guests started gathering for the book release in that Saturday morning. There were over thirty attendees of very mixed group, mostly from academia and professionals. Mr Rohit Shome, a young college graduate welcomes the guests and acted as the MC. He introduced this writer to speak about the Indian Subcontinent Partition Documentation Project Inc. (ISPaD) organization (New York, USA), activities which include monthly events in New York, yearly conference, a journal publication, publishing a newsletter, archiving partition-related materials, saving oral records of refugees, protectors and survivors of Indian partition, providing expert witness, and more. 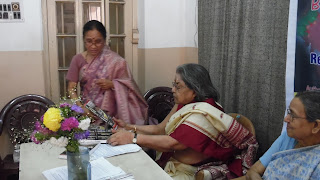 Rohit introduced the guests. He welcomed the Chief Guest Mrs. Ruchira Chakravarty, a poet and older daughter of the late poet Bishnu De and wife of Dr. Satyesh Chandra Chakravarty who was Dr. Dastidar's professor and mentor while I was studying at Presidency College, Kolkata. Dr. and Mrs. Chakravarty are now family friends for decades. Mrs. Chakravarty was a teacher of the South Point School for many dedades. Mrs. Chakaravarty known as IraDi, Older Sister Ira, was invited to open the book. IraDi opened the book with great cheer and enthusiasm from the audience. Then I presented a signed copy of the book to IraDi. 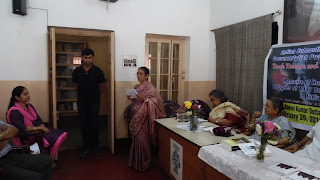 Introduction of the Book

Rohit then introduced Mr. Tapan Das, a retired planner for the West Bengal Government, Mr. Das worked with my coauthor Dr. Sachi Dastidar at Calcutta Metropolitan Planning Organization (CMPO) in the 1970s. This book has been dedicated to Mr. Tapan Das. We believe that without dedicated assistance from Das it would have been impossible for Dastidars to publish this book, and they are truly grateful to him. Das talked about his good time, frustration, and communication with Mr. Swarup Mitra, a top administrator of the Firma KLM. On behalf of the authors a signed copy of the book with a token gift and a "Thank You" card was presented to Mr. Das. 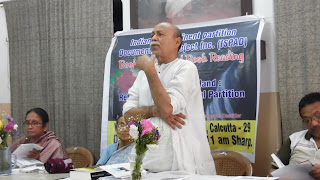 Rohit introduced Mr. Swarup Mitra from Firma KLM Publishers. Mr. Mitra talked about the authors, and other books of these authors published by them. He talked on behalf of Mrs. Swati Mukherjee, the owner of the publishing company who could not attend since she was out of town. Mitra said that they are very happy to publish Dastidar books. Mitra was presented a token gift and a "Thank you" card from Dastidars. 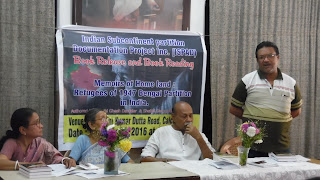 A number of individuals spoke afterwards. Dr. R. N. Chattopadhay of Indian Institute of Technology at Kharagpur, and founder of Prembazar Institute, an organization of past and present faculty and staff of IIT-Kharagpur that helps education at number of schools in nearby villages. Following Chatterjee Mrs. Pratima RoyChoudhury, a Special Guest, spoke and reminisced about her memoirs back home in LakshmanKathi village East Bengal, now Bangladesh. 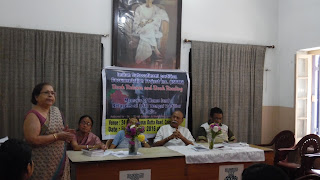 Then I read a bit from the last story in the book of Mrs. Ghosh, her plight as a refugee. Growing up in Madaripur, now Bangladesh, married at LakshmanKathi village, then moving to Dhaka for schooling, and then finally to Kolkata, India as a refugee. 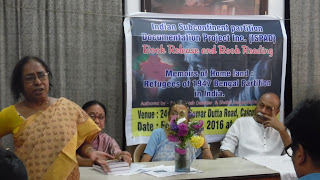 Rohit requested all attendees to introduce themselves, and then open the forum for question and answer. Most of the attendees expressed their experiences in their own words, some experience of close relatives.
In typical Indian-American style the event was closed with a vote of thanks followed by networking with tea and snacks. 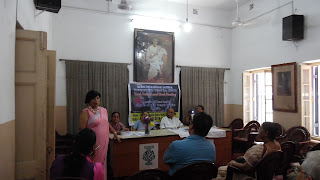 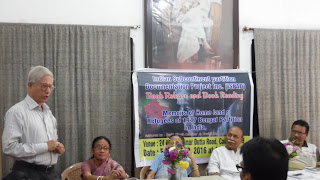 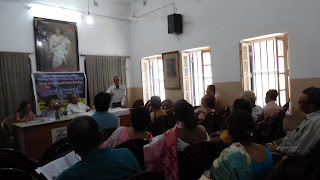 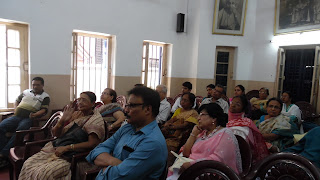 A Section of Audience 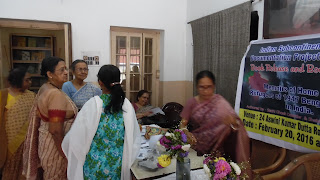 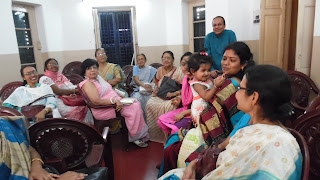 Posted by Empire's Last Casualty at 2:01 PM No comments: