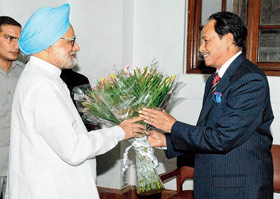 
Delhi reaches out to Dhaka parties


New Delhi, Aug. 14: Nearly all visitors from Bangladesh, barring those sympathetic to Prime Minister Sheikh Hasina, have of late warned India against putting all its eggs in one basket.


Sources said Delhi was increasingly becoming aware that Dhaka may have a new ruling alliance after general elections next year-end and that Ershad, who heads the Jatiya Party which has an alliance with the Awami League, could play an important role then.


External affairs ministry spokesperson Syed Akbaruddin said Ershad’s visit was “part of our ongoing engagement with a democratic and multi-party polity in Bangladesh”. Ershad’s visit to India is on an invitation the Prime Minister sent him.


Officials said Singh and Ershad discussed issues of bilateral importance, including the yet-to-be-signed Teesta water sharing treaty and the boundary agreement India’s Parliament is yet to ratify.


“The Prime Minister conveyed the high priority that the government and people of India attach to developing the friendliest of relations with Bangladesh, which is an important neighbour,” said a foreign ministry official.


Ershad’s last visit to India was in 2010 to attend the golden jubilee celebrations of the National Defence College of which he is an alumnus.

DINHATA: Ailing and bed-ridden, Asit Chakraborty (79) couldn't recognise the face that stared at him at first. Then the man uttered three words "I am Peyara” and Chakraborty instantly knew who the man was. It had been 63 years since Chakraborty had last seen Peyara, the man the world knows as Hussain Muhammad Ershad, the former dictator of Bangladesh. The 79-year-old Ershad returned to his hometown in Cooch Behar's Dinhata to a rousing welcome from the locals. It isn't every day that a former president goes on a morning walk down the dusty streets of Dinhata. Ershad did so on Monday. Accompanied by his son Eric Ershad, he entered India through the border town of Changrabandha. Ershad spent around 30 minutes with Chakraborty, enquiring about his family and other friends who had stayed back in Dinhata. Born in Rangpur (now in Bangladesh), Ershad had studied in Dinhata, his hometown. He left for Rangpur in 1946 after completing his matriculation. Ershad's father left for Bangladesh in 1950. His five brothers remained in Dinhata and have stayed on at their ancestral house. The former president was all praise for India's role in the independence of Bangladesh. "Bangladesh can never repay Indiaâ€™s debt. Without the active cooperation of India, Bangladesh would never have gained independence. India has done a lot for Bangladesh's development and is still playing an important role. After all, India can never deny its responsibility towards its neighbour," Ershad said. Later in the evening, Ershad met two more friends â€” Bijor Roy and Sudhir Saha. Roy recalled that in his schooldays Ershad was a good footballer and played striker. The former president has been savouring local delicacies that includes Boroli, a fish found only in the north Bengal rivers and lasa, a locally grown vegetable which, Ershad claims was his favourite dish. Apart from the local bigwigs who have flocked to his residence next to Dinhata's Forward Bloc office, representatives from the Greater Cooch Behar People's Association "which has been demanding a separate state” met Ershad, seeking his support. The former president remained non-committal. The former Bangladesh president has something else on his mind for his hometown. Ershad wants a rail link between Kolkata and Dinhata, passing through Bangladesh. "I will raise this issue with the Bangladeshi prime minister Sheikh Hasina and also Indian railway minister Mamata Banerjee," Ershad said. So happy is Ershad with his stay in Dinhata that he has already made up his mind to extend the nostalgia trip to December 10. Earlier, he was scheduled to leave on Tuesday.


A letter to Times of India:

It is good to know that dictator General Ershad is enjoying a trip to “Hindu India.” Indians in general and Hindus in particular suffer from amnesia. Let us not forget that Ershad let loose two anti-Hindu pogroms in 1990 and 1992 when thousands of Hindu mandirs, ashrams, smasans, libraries and tens of thousands of homes and businesses were destroyed; mothers and daughters abused. During 1992 pogrom I visited at least half-a-dozen destroyed smasans from Chittagong to Sylhet. During 1990 pogrom I visited dozens of mandirs including the Dhakeswari Mandir torched and destroyed with the deity gone forever. No one was punished. Yet he imprisoned Major Deb for years for demanding reconstruction of the 9th Century Ramna Kali Mandir destroyed by Army of Islamic Republic of Pakistan and its Bengali Islamist allies for absolutely no reason. In 1987 I met his Land Minister Sunil Gupta to ascertain why 1.5 million acres of land, thousands of homes, ponds and businesses were confiscated from Hindus through Enemy Property Act by declaring Hindus enemies of the state. It is time that he apologizes to all Hindus and all Bangladeshis for his sin.