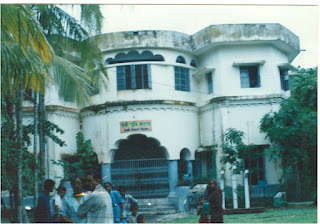 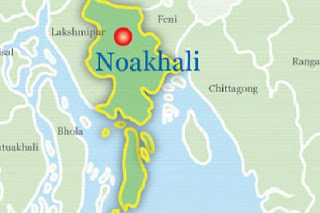 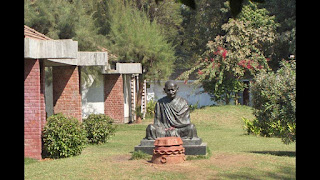 There exists a very important institution in Bangladesh called Gandhi Ashram located in Jayag village of Noakhali District of eastern Bangladesh, but hardly known in Bangladesh or in the world. Why does an important institution remain unknown to rest of the world? Is it because the name Noakhali is associated with one of the most heinous, divisive, and racist events in modern history of the world and of the Subcontinent? This was a peaceful district where in 1946 in pre-independence colonial British India a vicious anti-Hindu pogrom/genocide was committed by the Premier of Bengal Province Husain Suhrawardy and his ruling pro-partition Muslim League Party. The organized killing of Hindu minority was done by Muslim League supporters, led by Shurawardy, and a Muslim legislator Mr. Golam Sarwar. to prove to the colonial masters that Muslims and Non-Muslims are two different races according to Muslim League platform, thus needing two separate nations cleansed of each other. Many books and videos exist, including, eyewitness accounts of RabindraNath Datta (https://www.youtube.com/watch?v=1EbfLCR81uw. https://www.youtube.com/watch?v=pd0-CTxHN5k) and Swami Purnatmananda (https://www.youtube.com/watch?v=xb_2akrRGlo&list=PLB155CC75487FF18E) available at Ispad1947 channel of YouTube. Swami reminisced to Partition Center after 75 years in 2021 at age 97. There are stories of victims, Ramendu Mazumdar (https://www.youtube.com/watch?v=-aax7kF2_Mw), a noted performing arts personality of Bangladesh/Bengal whose home was torched, and Subhas Mazumdar (https://www.youtube.com/watch?v=3EqMs5R7zCA) whose family was affected. Many Hindu families were slaughtered amass, and some buried alive. The extended family of a 1990s Mayor of City of Calcutta (Kolkata) was burned alive. In 1946 pacifist Indian independence leader Mohondas K. Gandhi came to Noakhali to stop the killing, atrocities, forced conversion, and confiscation of indigenous minority land and their homes. Many believe that tens of thousands of girls and mothers were abducted and forcefully converted. There are many books on the topic. Mrs. Ashoka Gupta, a pre-independence woman activist, went to Noakhali with Mrs. Sucheta Kripalani, and others to recover the girls and mothers. Mrs. Gupta presented some of her books to this writer and to Partition Center. Her daughter Apala came to speak to the Partition Center Conference in New York in late 2010s. During a 50+ day walking tour in 1946, Gandhiji and fellow rescuers stayed at the home of a British barrister Hemanta Kumar Ghosh of Jayag village. Later Mr. Ghosh donated his home and hundreds of acres of agricultural land, ponds and more to Gandhi for his cause of liberation through "Ambika Kaliganga Charitable Trust” named after his parents from Jayag. After Gandhi’s murder in 1948, his followers turned the place into a pacifist ashram sheltering poor and the needy, and a center for rural development. Well after Pakistani rule, in 1975, the original trust was transformed to Gandhi Ashram Trust. In 2021, “For West Bengal” (Paschimbanger Janya) association led by Dr. M. Roy commemorated 75th Anniversary of Noakhali Killing, and 50th Anniversary of !971 Bangladesh Genocide. 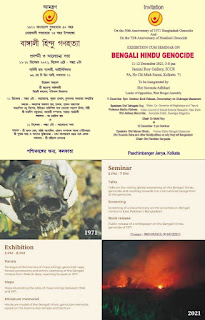 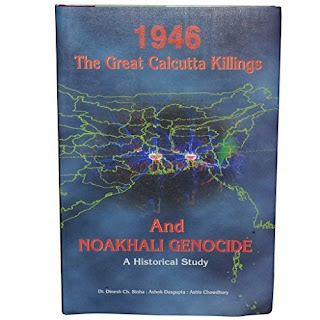 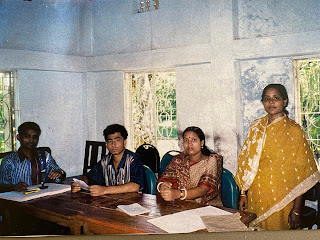 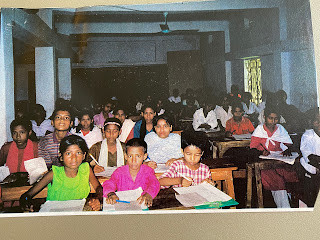 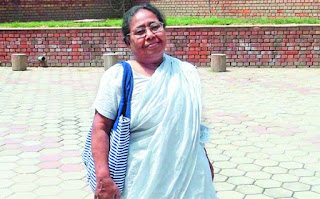 Our Probini Foundation holds regular conferences/meetings in Dhaka, Bangladesh. and in Kolkata, West Bengal, India with the schools and orphanages that Probini helps. Some schools seeking Probini help also join. In one such meeting in late 1990s, Ms. Jharna Dhara Chowdhury came to seek our help. She was the head of Gandhi Ashram. Locals called her JharnaDi, Older Sister Jharna. At her request this writer went to visit the place. From Dhaka express bus takes four to five hours to Jayag. The ashram is a short walk from the bus stop. At the very entrance there is Jayag Lake, established by Ghosh family centuries ago. But there stood an Islamic mosque occupying the lake by blocking the entry to the lake. During the tour of ashram site, it was said that the mosque was illegally occupying not only the lake, but they and others also confiscated most of the agricultural land donated to the ashram. 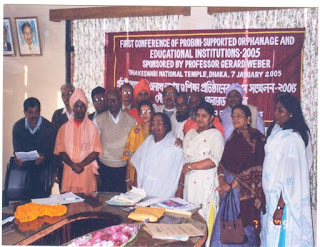 2005 Probini Meeting at Dhaka, funded by Prof. Gerard Weber of New York, JharnaDi is at Center in White Sari 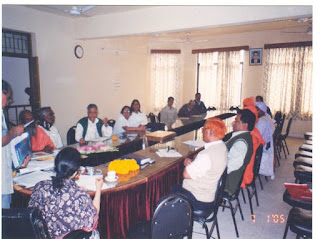 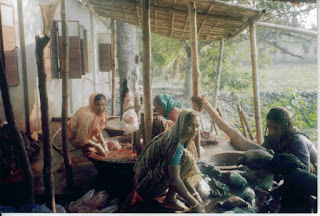 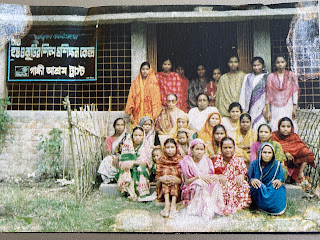 JharnaDi was a remarkable, brave woman who in 1971 during Pakistani genocide against Hindus saved many lives. Pakistan Army came to raid Hindu girls’ Prabartak Sangha and other hostels (dorms) to take away the girls for abuse and forced conversion. JharnaDi led a group of resident dorm students through jungles and paddy fields, sleeping outdoor at night for days and nights, barely fed, until they reached the safety of Indian border at Tripura state in the east. Sadly, no Muslim-majority nation condemned those acts. Even most democratic nations didn’t condemn, even Pakistani-Bangladeshi-Hindu-Refugee-Indians colloquially called Bangal (East Bengali) or Udbastu (refugee) who fled to India remained quiet.

Here is a memorial tablet of all 15 teachers – 14 males and 1 female, 14 Hindus and 1 Muslim - murdered by Pakistan Army at a Prabartak Sangha school in Chittagong. 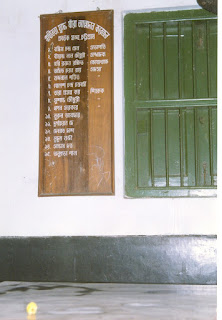 In 1946 several pacifist workers traveling with Gandhi stayed back at Gandhi Ashram site to serve the people. Swami Purnatmananda joined Gandhi’s 2-month walk as someone who knew Bengali and Gujarati. In 1971 the genocidal Army of Islamic Republic of Pakistan and their Bengali supporters came after half-a-dozen ascetic pacifists to hack them to death. Two of them were murdered while they were meditating, and one was murdered even after Bangladesh’s liberation. There were others. There is a memorial for them at the entrance. Sadly, that memorial has been destroyed several times by local thugs. Not a single Muslim-majority nation condemned those atrocities, unlike Bangladeshi secular Muslims. 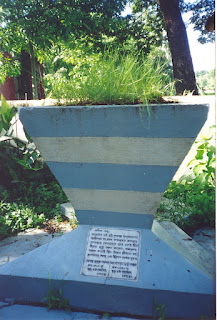 Memorial for Victims of Pakistani Genocide in 1971

This writer asked the ashram and the villagers how can this abuse be reversed, and how can the lake be returned back to the ashram. There was no answer. So, in late 1990s this writer wrote to local and national authorities for return of illegally occupied ashram lake. During one of his trips he met with a minister in Dhaka of a coalition government led by the nation’s founding political party. Soon Jayag Lake was returned back to the ashram before 2000, which is now used for raising fish, and bathing for the villagers. There was pressure on ashram workers for raising the question of illegal occupation of the lake. In early 2000s when this writer visited the ashram, JharnaDi rushed him to the District Administrator to show him the person who was writing those letters, and complaining against illegal confiscation of minority properties. To that this writer said, “True. If there is any problem, I must be blamed. JharnaDi didn’t know of my letters.” The District Administrator replied, “I appreciate your work in saving our history.”

For her dedication and bravery this writer nominated JaharnaDi for an international award. Instead, she received the prestigious Padma Award from the Indian Government.

At Noakhali Gandhi Ashram Probini provides scholarship for students who live at ashram hostel. Ashram decides who gets our funding. In a rare case, Ms. Jharna Dhara Chowdhury wrote to Probini for an exception. Request was for a girl who lost her father, the only wage earner of the poor family. The father used to be a rickshaw driver. The request was that the entire scholarship money – possibly less than $25 dollars a month – to be given to the mother to support the mother, daughter and son. The mother promised to send her daughter, whom Probini was supporting with tuition, dorm and food, and son to school as commuter students, but not dorm resident. A few years down the road when this writer was chatting at the Ashram, the family rushed to meet us. After touching our feet to show love, the girl said, “Uncle, I finished high school. After graduation I got admission to college, and now I am able to support Ma and younger brother Bhai through private tuition (coaching).” It was really heartwarming for Probini to learn firsthand a success story of survival of extremely marginalized poor minority family. 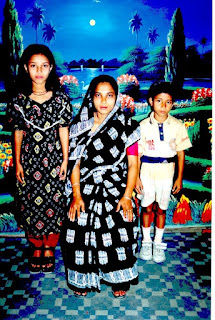 The Girl, left, who Became the Bread Winner after H.S. Graduation 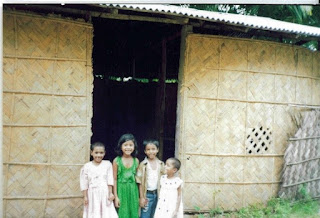 Later JharnaDi informed that their main building was being transformed to Gandhi Ashram Museum, and sought this writer’s idea and help. So, he took a summer off to write a Gandhi Ashram Museum Booklet, giving the story of Gandhi’s visit, story of Noakhali, Gandhi’s and local’s struggle. It was also meant for an income for the museum by selling the booklet to the visitors. JharnaDi, Ashram Committee, and Museum Committee all liked the idea and asked me to write the booklet. For some reason this writer’s name as the “Editor” of the booklet wasn’t there but someone else’s. A 2-page hand written apology came from JharnaDi with the booklet. The booklet contained articles by this writer, and other information that was written for inclusion. 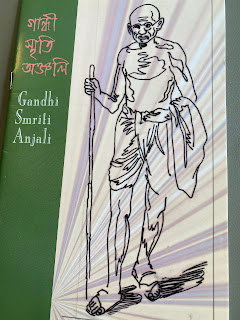 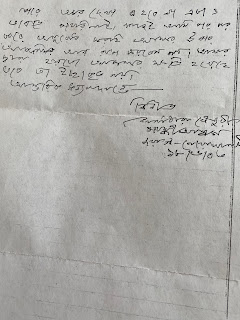 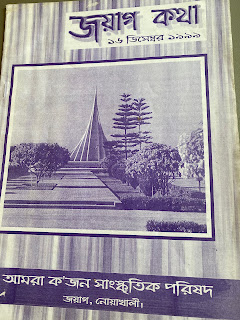 The ashram is progressing well, but JharnaDi passed away in late 2010s.

Some comments in social media

Posted by Empire's Last Casualty at 9:41 AM No comments: