A Poor Monk Goes to Help the Oppressed; July 2022

For The Partition Documentation Project, U.S.A. 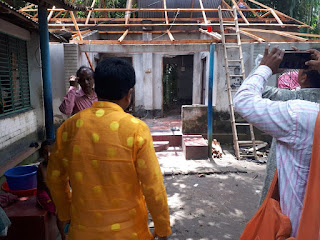 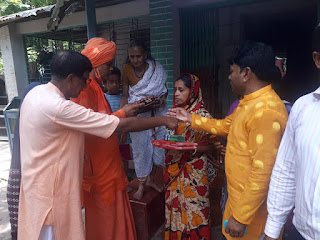 Monk Sharing Grief and Relief with the Oppressed 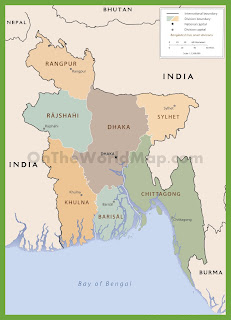 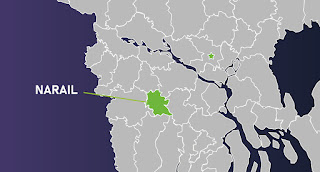 Narail is a Hindu-majority area in the Muslim-majority nation. Attacks by Muslim thugs have become routine. Demonstrations by persecuted Hindus with minority Buddhists and Christian, and secular Muslims haven’t made any dent in ethnic cleansing of indigenous minorities. Routinely students, teachers, professors, shop owners and average minority Hindu citizens are sent to prison for no apparent reason.

Here are few reports from an on-line journal “UNITY June-July 2022” edited by eminent journalist Mr. Sitangshu Guha, mostly quoted from Bangladeshi newspapers. We thank courageous journalists who worked hard to bring the atrocities to the attention of the world, unlike pro-oppression newspapers of the West and the East. See Guha’s newsletter: https://drive.google.com/file/d/1bAxUssewMw4cMtvIgMGb55xoO61lq_U5/view

We thank the generosity and courage of a poor Hindu monk who made a long journey to be with the oppressed. Victims were overjoyed to see a monk standing with them in their time of awful pain. 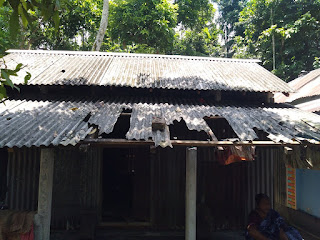 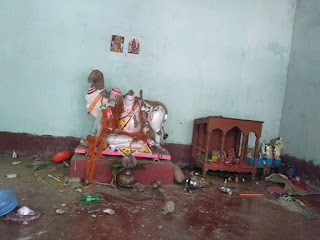 A mob yesterday vandalised a temple, a grocery store and several houses of the Hindu community in Sahapara area of Lohagara, Narail.

Angry villagers went on a rampage in the afternoon, alleging that a Hindu man said to be 18 years old made a post on Facebook that hurt their religious feelings, officials said.

After Juma prayers, the villagers went to a grocery store owned by the individual's father and vandalised it.

The mob then attacked and vandalised several houses, including the family's.

After they broke into the Sahapara temple and broke the furniture, the police used tear gas and fired empty shells, officials said.

In the evening, the police took the man's father into custody from his house.

Police could not bring the situation under control before night, said locals.

The individual who allegedly made the post managed to flee the area.

They said police forces were deployed in the area to prevent further violence. 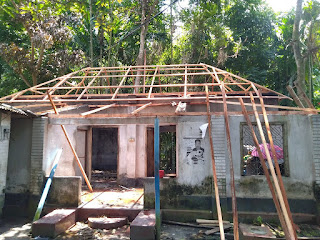 Authorities in south-west Narail deployed additional police force to maintain law and order after a Muslim mob allegedly attacked minority Hindu properties in a remote area of the district following a Facebook post reportedly shared by a Hindu youth ridiculing Prophet Mohammad (SM). The police launched an investigation into the attack on the minorities on Friday evening and had been looking for the Hindu youth,

Akash Saha, a student at a local college, after taking his father Ashok Saha, a trader of Digholia Bazar, to safe custody. The police investigators said that the attacks on minority properties were carried out in Hindu-dominated Saha Para (neighborhood) for around three to four hours after the Facebook post was circulated on Friday.

‘Two rooms of a house owned by Gobinda Saha were set on fire while two shops and a temple near a crematory were vandalised by the agitating mob,’ said Azgar Ali, Upazila Nirbahi Officer of Lohagara.

He said that they were maintaining law and order by deploying additional police, members of the Rapid Action Battalion and Ansar members in the Dighalia market area. Pravat Kumar Ghosh, a member of the Dighalia union council, said that trouble began after the Hindu youth Akash shared an objectionable post on his Facebook hurting Islam and its Prophet. The incident took place weeks after India’s ruling Bharatiya Janata Party leaders made disparaging remarks against the Prophet Muhammad in May, triggering a global outcry.

Nupur Sharma, the then BJP spokeswoman made the comments during a television debate and former BJP Delhi media head Naveen Kumar Jindal defended the comments on Twitter. Like other Muslim countries, protests were also held in Bangladesh over Sharma’s controversial remarks. Terming the attack on the properties of minority people unexpected, Digholia union council chairman Syed Burhan Uddin said that one of his members Jannat Mridha was also beaten by the mob while he was trying to resist them.

Over 200 members from law enforcement agencies were posted in the union and the Digholia market was kept closed to avoid further trouble, said Burhan Uddin, adding that police took the youth’s father to safe custody. The Lohagara police station officer-in-charge Sheikh Abu Hena Milon said that they were trying to arrest the youth who spread the post hurting the Prophet.

He said that a separate case would be filed against those who attacked minority properties. The police official said that a shop owned by the youth’s father at the Digholia Bazar also came under attack while the law enforcement agencies were trying to disperse the mob. A senior police investigator at the police headquarters said that they immediately established contact with the Facebook authorities to stop the spread of the ‘objectionable post’ and now they were examining the profile and trying to detect the device used for spreading hate speech.

Local Awami League lawmaker Mashrafe bin Mortaza visited the spot on Saturday along with local political leaders and senior government officials from the district headquarters. He called upon all not to fall into the trap of people who were trying to harm communal harmony. According to a report by legal rights group Ain O Salish Kendra, 3,679 attacks were carried out on the Hindu community in Bangladesh between January 2013 and September 2021. The police and home ministry officials said that vested quarters had been spreading disrespectful content against Islam and Prophet leading to religious tension.

Jatiya Samajtantrik Dal, Left Democratic Alliance, the Communist Party of Bangladesh, the Socialist Party of Bangladesh (Marxist), Sammilita Samajik Andolon, Ganosamhati Andolan and Bangladesh Youth Union, among others, in separate statements on Saturday condemned the attacks on minorities and called for identifying the perpetrators. The ASK also expressed deep concern over the attack and said that incidents

recurred as no exemplary actions were taken against attackers in past incidents. They called for the protection of minority people and their properties in Bangladesh.

Attacks on religious minorities in Muslim-majority Bangladesh have increased in recent years. A temple, shops and several houses of the Hindu community have been vandalised in southwestern Bangladesh by some unidentified persons over a Facebook post allegedly belittling Islam, in the latest spate of violence targeting the religious minority in the country, according to media reports on Sunday.

Police fired warning shots to disperse a mob that vandalised several homes and torched one of them in Sahapara village in Narail district on Friday evening, bdnews24.com, an online newspaper quoted Haran Chandra Paul, an inspector at the local police station, as saying. The attackers also threw bricks at a temple in the village during the attack around 7:30 p.m. (local time), he said.

They also broke the furniture inside the temple. Several shops were also vandalised, The Daily Star newspaper reported. Mr. Haran said a young man posted something offensive on Facebook, triggering anger among Muslims. Police took his father to the police station after a search for the young man failed to trace him. As tension mounted over the post after the Friday prayer, a group of Muslims demonstrated outside their home in the afternoon. They attacked the homes later. No attacker was arrested.

The situation was normal at night, said the police inspector.

Narail Superintendent of Police Prabir Kumar Roy said the law enforcers were working to keep the situation under control. “We’re investigating the incident. Those responsible for the violence will face action. The situation is normal for now,” Mr. Roy said. Police forces were deployed in the area to prevent further violence, The Daily Star newspaper reported. "After one group looted all our valuables, another group came and found our door open. As there was nothing left to loot, they set our home on fire," the paper quoted Deepali Rani Saha, a resident, as saying.

Deepali's house was among homes and dozens of shops that were vandalised or burnt down in Sahapara village. A former female member of the reserved seat in Dighalia Union Parishad said most of the able-bodied people have left the village after the attack. "Almost all houses are locked. Only the elders of some families are home. They too are scared," she said.

"Police are on guard in the village, but we cannot trust them," the newspaper quoted 65-year-old Shibnath Saha, president of the village's Radha-Govinda temple, as saying. Attacks on religious minorities in Muslim-majority Bangladesh are increasing and many of them happened after rumours or fake posts spread through social media, bdnews24.com said.

Last year, some Hindu temples in Bangladesh were vandalised by unidentified persons during the Durga Puja celebrations, prompting the government to deploy paramilitary forces in 22 districts after four people were killed and many others injured in riots.

According to a report by legal rights group Ain O Salish Kendra, 3,679 attacks were carried out on the Hindu community in Bangladesh between January 2013 and September 2021.

Recent Demonstrations Outside Bangladesh: A Ray of Hope for Victims 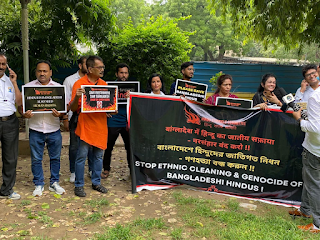 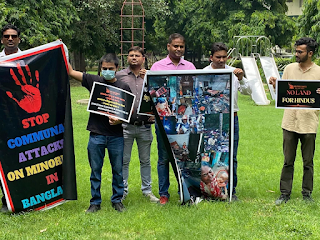 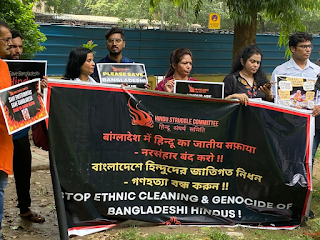 Here are some pictures of his delivery of relief to the pogrom victims: 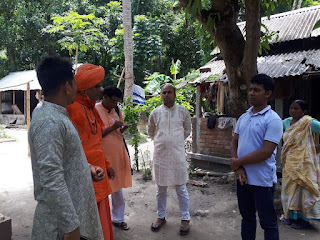 Poor Hindu Monk with the Victims 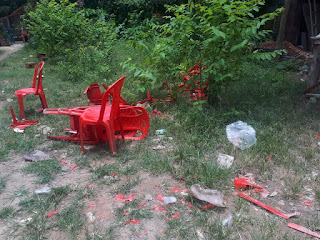 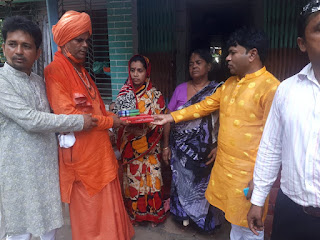 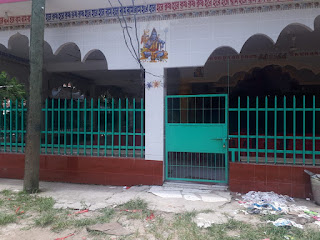 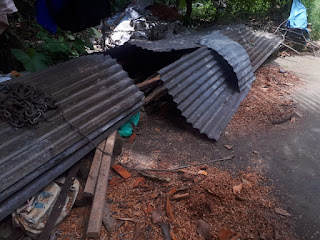 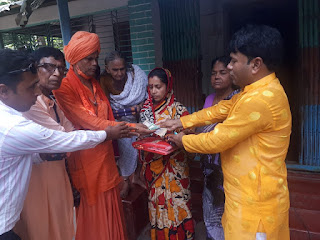 On behalf of all the victims we thank the monk.

Comments on social and other media:

Please use money to spread hope wherever it is most needed. Remember that God is with you.

Love, Arlene (A Christian minister in the U.S.A.)

Posted by Empire's Last Casualty at 8:17 AM No comments: