Visit to the Ancient city of Indus Civilization


From our college days we wanted to visit Harappa and MohenjoDaro, prehistoric cities of Indian and Hindu civilizations and culture. Our first attempt to visit MohenjoDaro in late 1980s failed because of civil disorders in Pakistan. Then on a trip to Lahore in late 2000s, the cultural capital of Pakistani Punjab as well as all of Pakistan, we decided to visit our heritage site. Our Lahore host Professor Sindhu and her mother, whom we called Didi, older sister, found us a nice air-con sedan for us to make the trip. We invited the mother and daughter to join with us as they had never seen the place, leaving behind her other grown children Shahid, Shabnam, Rizwan and Nabila for our day trip. Soon we realized that not very many people in Lahore know about Harappa.
Harappa is a nice place for a day trip from Lahore which is about 175 kilometers away (some literature say it is 250 kilometers away,) and can be easily made in 3 hours. The journey was quite pleasant as we passed villages after villages in that flat, green farming countryside. There were no big signs to the site and the driver had to ask locals for direction. Our first surprise came when the driver passed the turn because of lack of signage. The road sign it was partly damaged and written in mid-sized Urdu letters, not easily visible from a passing car. At the ticket counter realizing entry fees to be 20 times higher for foreigners Didi wanted us to pass for locals to save money. The official at the counter was agreeable for Sachi to pass for a local with his Bengali “half-punjabi shirt,” but he would have none of it with Shefali wearing pants. As we were traveling for over 5,000 kilometers, mostly by road crossing many national boundaries, we were carrying two small carry-ons. We had limited supply of local outfit with Shefali carrying only one sari which she forgot to wear that day. “No Pakistani woman wears pants,” was his answer. Harappa can be reached by train or bus from Lahore via nearby Sahiwal town. One can easily have lunch, tea and dinner in roadside dhabas or eateries.
Walking down the brick paths was exhilarating, exciting and hallucinating for us. It was “a dream come true.” The entrance in English and Urdu introduction says, “MOUND ‘AB’ CENTRAL: The high level of Mound is the result of continuous rebuilding of the city. In this area the curved wall situated is actually what may have been a drain during the final phase of Harappa occupation around 2200 and 1900 B.C. In the lower levels there is a large well and a bathing platform that belongs to an earlier period. This may have been public well associated with a bathing and washing area. Unlike Mohenjodaro where there are discovered numerous wells in each neighborhood, as yet only eight wells have been discovered in Harappa. Some of them were private and some were public wells. Much of the top structures were robbed by the contractors who built the Lahore, Multan railway track during British rule. The lower structures were destroyed by the Harappan inhabitants to reconstruct their houses. The archeological excavations were conducted here by Raj Bahadur Daya Ram Shani and M. S. Vats during 1921 to 1924 A.D. and 1926 to 1934 A.D. (For more details visit the Web site: www.harappa.com)” As there were no other visitors, the security police doubled as a guide. This was good for us, but sad for Pakistan, India and for students of Indus and Indian Civilization. There was no rush of humanity – peasants and babus – as in Sarnath and Kashi Viswanath in Varanasi, Kutub Minar in Delhi, Jaliiwanwala Bagh in Amritsar, Victoria Memorial in Calcutta, Ajanta in Maharashtra, Konark in Orissa, Bagan in Burma, or Gaya in Bihar. To us this solitude also felt even more contrasting as we visited Xian in China a few days earlier on this trip. In terracotta warrior-famed Xian, discovered only in 1970s, the China has built a huge air-conditioned dome covering the entire site protecting it from the elements, and in that process had made Xian the second-most visited place in China bringing millions of tourists with billions of dollars of income and creating tens of thousands of jobs. To protect the structures from further erosion in Harappa many of them have been covered with plasters. The area is in further jeopardy because of a water buffalo farm on its unguarded boundary and a Muslim grave within the pre-historic city itself. Even at a leisurely pace the site can be visited in an hour or two. Now it is several kilometers away from the river on whose bank it was located.


There is a small museum and a gift shop at its entrance run by the Archeological Department. A number of booklets on the prehistoric city are available at the counter. All the workers were eager to show us their collection. As we were almost at the end of our long journey we bought one copy each of their collection because we won’t have to hand carry for too long. (Space on our small boxes could be made only by discarding some of our belongings.) As we were departing, the entire crew said, “Come again, our Hindu friends.” 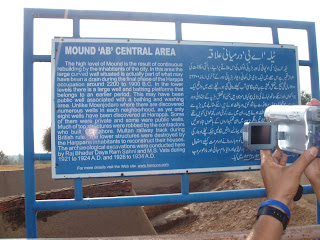 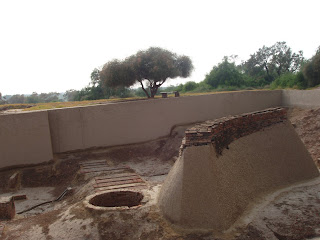 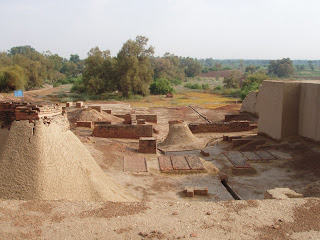 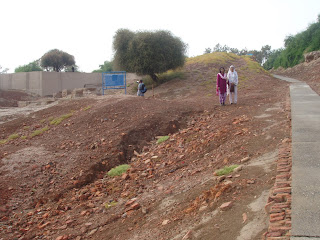 A Section of the City 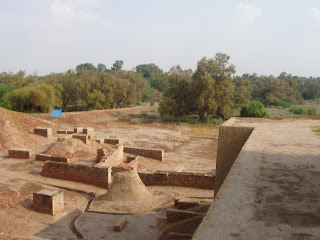 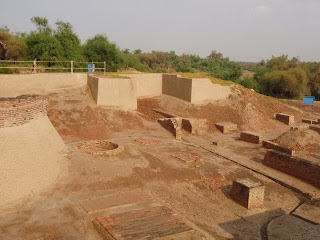 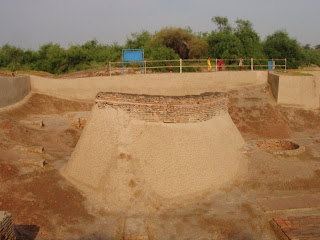 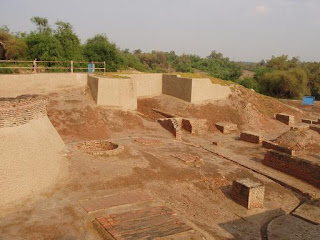 Top View of the Ancient City

Posted by Empire's Last Casualty at 7:45 AM