Living among the Believer: Stories from the Holy Land down the Ganges 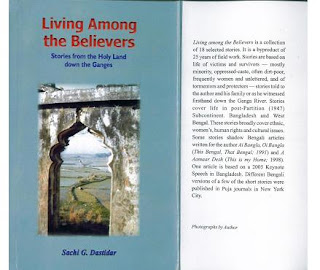 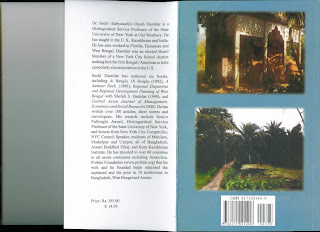 Living among the Believer: Stories from the Holy Land down the Ganges
Living among the Believers (2006) is a collection of 18 selected stories. It is a byproduct of 25 years of field work. Stories are based on life of victims and survivors — mostly minority, oppressed-caste, often dirt-poor, frequently women and unlettered, and of tormentors and protectors — stories told to the author and his family or as he witnessed firsthand down the Ganga River. Stories cover life in post-Partition (1947) Subcontinent: Bangladesh and West Bengal. These stories broadly cover ethnic, women’s, human rights and cultural issues. Some stories shadow Bengali articles written for the author’s Ai Bangla, Oi Bangla (This Bengal, That Bengal; 1991) and A Aamaar Desh (This is my Home; 1998). One article is based on a 2005 Keynote Speech in Bangladesh. Different Bengali versions of a few of the short stories were published in Puja journals in New York City.

Dr. Sachi (Sabyasachi) Ghosh Dastidar is a Distinguished Service Professor of the State University of New York at Old Westbury. He has taught in the U.S., Kazakhstan and India. He has also worked in Florida, Tennessee and West Bengal. Dastidar was an elected Board Member of a New York City School district making him the first Bengali-American to hold a popularly elected position in the U.S.
Sachi Dastidar has authored six books, including Ai Bangla, Oi Bangla (19920, A Aamaar Desh, (1998), Regional Disparities and Regional Development Planning of West Bengal with Shefali S. Dastidar (1990), Central Asian Journal of Management, Economics and Social Research (2000) and Living Among the Believers (2006). He has written over 100 articles, short stories and travelogues.
His awards include Senior Fulbright Award, Distinguished Service Professor of the State University of New York, and honors from New York City Comptroller, NYC Council Speaker, residents of Mahilara, Madaripur and Uzirpur, all of Bangladesh, Assam Buddhist Vihar, and from Kazakhstan Institute. He has traveled to over 60 countries in all seven continents including Antarctica.
Probini Foundation (http://www.prohini.org/) that his wife and he founded helps educated the orphaned and the poor in 18 institutions in Bangladesh, West Bengal and Assam.
Publisher: Firma KLM Publishers, Kolkata (Calcutta), India
Price: $ 15.95

"We Urgently Need a Strong Protector Like the Author"
Author: Chittabrata Palit
Publication: Dainik Statesman
Date: February 21, 2007
Book Review - Living Among the Believers: Stories from the Holy land down the Ganges, by Sachi G. Dastidar
The reviewed book's writer is Sachi or Sabyasachi Ghosh Dastidar who is a distinguished professor of State University of New York at Old Westbury. He is an uncompromising fighter for human rights. By birth this author is of Bengal-origin. He has investigated oppression of Hindu minorities in Bangladesh for many decades. Through 18 story-telling he has composed the book. The main actors of those stories are all oppressed, some living while others are dead. Most of the people are from oppressed-caste, mostly women, members of the grassroots. While telling their stories he has also exposed the mask of the oppressors. "The Ganga [Ganges] flows through Bengal" is the story continues to being told since the days of (1947) partition. The aim of the book is to establish human rights. The first story, NivaRani Goes to Heaven, tells us how the movable and unmovable assets of a widow were confiscated.
Again, in SriKanta story, that property confiscation chronicle is being told. In that story how the minority Christian community is struggling to protect themselves and survive is being told. In the last story, "Miracles happen even today," tell us how Mr. NabaGopal held on to his dear village and survived in spite of oppression and assaults. There is a description about him. All his stories show that it is more of greed of minority assets than oppression of (Hindu) minority is the root cause of atrocities. In that question of religion has come up; only minority properties are being forcefully taken over. To do that oppression of women has become necessary. It is not just to oppress minority women that those atrocities are being done. Those animalistic atrocities got entangled with taking over their (Hindu) assets.
Yet, in many stories the writer has shown where communal harmony has existed. He has written about where Hindus and Muslims have acted as brothers. In the Fall Festival (Durga Puja) both the communities have celebrated together. That who has survived, their hope is for a better future. Not that those terrible religious atrocities didn't happen. In terrible killings both East and West Bengal have been destroyed themselves. Again, through the course of nature those broken relationship have come together. Nostalgia has driven Bengalis towards their place of birth, and toward one God.
Once after returning home for puja one found that most of the loved ones are gone. There is no trace of minority Hindus. After many tries some of the old acquaintances were found. For those who were not found, tarpan (prayer offering) for the ancestors was done. The old home was left uninhabited. Yet, Ganga still continued to flow. To visit one's own ancestral home there is so many barriers, so many obstacles. Even there is bloodshed. Recently, Mr. Van Shendel has proposed a barrier-free united Bengal in his "Bengal Borderland" book. There will be two states and two governments but no border. There will be travel from East to West and West to East; and there will be continued conflicts. Today, because of market economy communal conflict has gone down quite a bit. Moreover, lots of time has passed. The ferocious condition immediately after partition is also gone. Either the minorities are safe now or they are almost extinct.
Yet Bangladesh is not a peaceful place. In the name of religion lots of anti-religious activities acts are being committed. Truly there is a need for a steadfast protector like the author. This book will make our rulers more conscious. I wish large circulation of this book.