On a bright 70-degree winter afternoon Mr. Reuben Aaron, Administrator, of the school welcomed this reporter with typical Bengali-style welcome with folded hand saying, Namaskar, or Greetings. The building at Bipin Behari Ganguly Street at Bowbazar neighborhood in the old Central Calcutta with its big arch proclaiming its presence is across the street from Firma KLM Publishers – publisher of many of this writer's books. Mr. Aaron welcomed my colleague, Mr. Tapan Das, a native of Kolkata whose family has been living in the same building for over 300 years as well as celebrating Mother Goddess Durga Puja festival for three centuries, and me, and in minutes arrived hot tea.


Mr. Aaron added that the Kolkata Jewish community runs one more school called Jewish Girls’ School (established in 1881) at Park Street, and used to run another school at Raja Bazar neighborhood, but  that has temporarily closed down. Elias Meyer school was established in 1888 while it was moved to the current site in 1925. “The school has 530 students of which 70% are Muslim and 30% comes from Hindu majority” he said. “I am the last Jew who graduated from Class 12 in this school.”
The school administration has to come up with Rs. 300,000 ($4,200) to Rs. 500,000 ($7,000) rupees deficit after receiving state grants and student tuition. This is substantial for a Jewish community of barely two dozen individuals. Aaron said “we are so small in number that we cannot have minion (minyan) as we need at least 10 adult males for our religious services. We have that when delegations visit us from overseas, as we are expecting a group of 22 to 24 visitors from England next month.” Mr. David Ashkenazy, a Board Member said “Nevertheless, all our Kolkata Boards are fully Jewish.” Ashkenazy is also the Hon. Secretary of Magen David Synagogue, President and Trustee of the Beth-El Synagogue and is a Board Member of all Jewish schools in Kolkata. We were introduced to another of the Board Members, Mr. Elisha Twena, who is also the Honorary Treasurers of Maghen David Synagogue and Beth-El Synagogue, and Board Member of Neveh Shalome Synagogue and Oseh Haised Board. Although our discussion was conducted in Bengali which Reuben speaks like any native Bengali but both Ashkenazy and Twena said “we are not as fluent in Bengali as Reuben is although we are Calcuttans for many generations. We can also speak Hindi, English and Hebrew.” I reminded them of my old friend Dr. Ezra, a, Jew, and a graduate of the Bengal Engineering College of the Calcutta University who later became a Dean at our sister campus of the State University of New York at Farmingdale. Their family name bears a famous street in the BarroBazar business district called Ezra Street. Our meeting ended with a second cup of hot tea, now in the presence of the school’s headmistress, a Hindu, as the students left the school under the gaily decorated colored streamers of Christmas and New Year celebrations.

Should anyone be interested in learn about Elias Meyer school, they may write to ispad1947@gmail.com for further information. 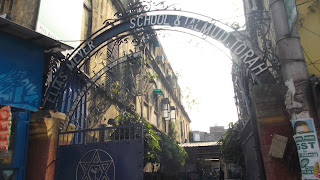 A Very Normal Entrance to the Old Building 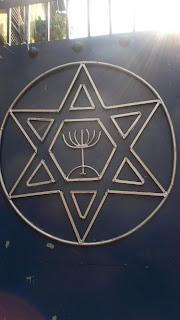 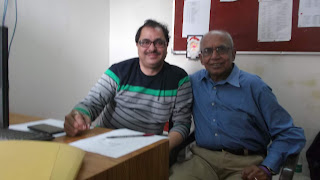 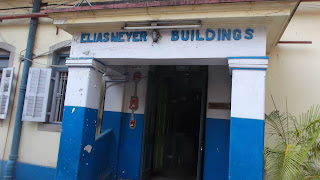 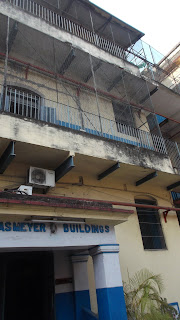 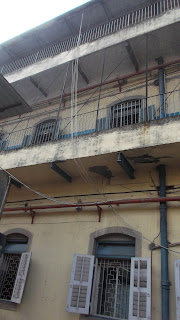 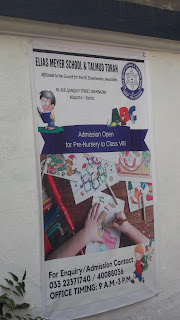 Invitation to Join the School 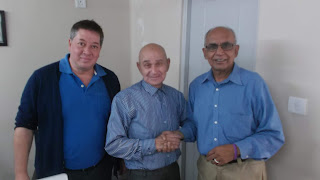 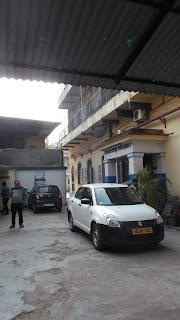 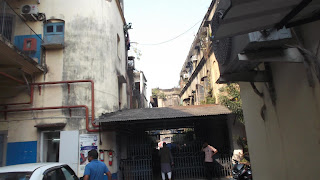 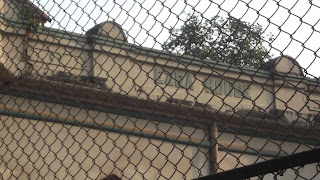 Posted by Empire's Last Casualty at 9:17 AM