Unakoti, Tripura, India: Ten Million Reasons why Lord Shiva’s Rest Area could be Ours Too 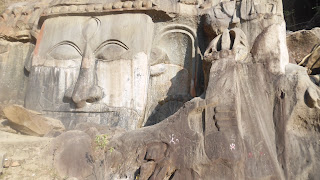 India is a land of ancient culture and tradition with thousands and thousands of holy and archeological sites: some well-known and others hardly known but great treasures worth visiting nonetheless. Unakoti in northeast Tripura state of northeast India is such a remarkable place yet rarely visited by anyone. 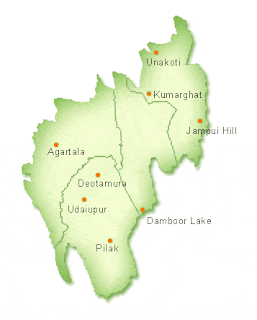 According to Tripura Government literature Unakoti “…is ‘Shaiba’ (Saivite) pilgrimage and dates back to 7th – 9th centuries if not earlier. The marvelous rock carvings, murals with their primitive beauty, waterfalls are not to be missed. Unakoti means one less than a crore [ten million] and it is said that these many rock cut carvings are available here. As per Hindu mythology, when Lord Shiva was going to Kashi [Varanasi] along with one crore gods and goddesses He made a night halt at this location. He asked all the gods and goddesses to wake up before sun rise and proceed for Kashi.
“It is said that in the morning, except Shiva himself, no one else could get up so Lord Shiva set out for Kashi Himself cursing others who become stone images. As a result we have one less than a crore [ten million] stone images and carvings at Unakoti. These carvings are located at a beautifully landscaped forest area with green vegetation all around which add to the beauty of the carvings. The images found at Unakoti are of two types, namely rock-carved figures and stone images.
“Among the rock cut carvings, the central Shiva head and gigantic Ganesha figures deserve special mention. The central Shiva head known as ‘Unakotiswara Kal Bhairava’ is about 30 feet high including an embroidered head-dress which itself is 10 feet high. On each side of the head-dress of the central Shiva, there are two full size female figures - one of Durga standing on a lion and another female figure on the other side. In addition three enormous images of Nandi Bull are found half buried in the ground. There are various other stone as well as rock cut images at Unakoti. Every year a big fair popularly known as ‘Ashokastami Mela’ is held in the month of April which is visited by thousands of pilgrims.” (Tripura Tourism Department web site)
Best way to reach Unakoti is by road from the state capital Agartala. Agartala is connected by air with Kolkara (Calcutta), Delhi and Guwahati. The 180 kilometer meandering road journey takes about four hours as the road passes through congested areas near the capital followed by two-lane undivided highway through evergreen forests and hilly areas.

If the state government was able to think imaginatively Unakoti could have become one of most important places on the tourist map of India attracting millions of visitors and creating thousands of jobs and benefiting hundreds of businesses, petty traders, hotels, taxis, car rentals and restaurants. On January of 2017 when I visited I was the only visitor to the spectacular site, not the tens of thousands one sees at Taj Mahal, Victoria Memorial, Anajta, Leh or Madurai. To many Hindus the site is a living temple of Lord Shiva as a result some puja (offering) sites are there. Large number of pilgrims visit on holy days as it happened a few days before my visit on Makar Sankranti Day in mid-January, also known as Poush Sankranti, i.e., the end of the month of Poush. On that day thousands of pilgrims came for a holy dip in that chilly mountain stream and pray for well being of their families. 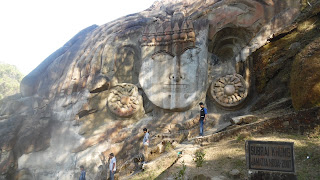 With a bit of imagination the State Government could develop hiking trails for people who want to spend days enjoying the beauty of the land, home stay and more. Unakoti is on Bangladesh border, and if border crossing is developed Bangladeshis may also be able to join in Hindu religious festivities and visit the creation of their ancestors almost fourteen hundred years ago.

Tripura, a beautiful peaceful land with mixed plains and hill residents who claim to have one of longest unbroken monarchies of the world. Yet after absorption into India and removal of monarchy the state convulsed with mass killings by tribes against majority plains’ Bengalis wanting to cleanse the majority Hindu Bengalis for Muslim-majority Bangladesh. Some of the gruesome massacres of innocent residents took place in the 1980s and 1990s, some led by tribal extremists, others by a small group of tribal Christians led by Bijoy Hrangkhawl, a convert. Since those unfortunate days peace has returned back and patrolling of highways by paramilitary is practically gone. Asked how the violence came down, an affected tribal hill resident said, after a bit of serious contemplation "for one, a barbed fence with Bangladesh prevented large-scale arms smuggling across the border. Then the residents of the hill got tired of their kids being deprived of schooling as the schools and colleges were closed during militancy, then there were problems with food and jobs, and more." After incorporation into Indian federal system the state was run by Congress Party, losing to the Communist Party of India-Marxist (CPM) in 1978 who lost to Congress again. Since 1998 the state is governed by its leader Manik Sarkar of CPM. Still the effects of killing, ethnic cleansing and mistrust haunts the state. During my trip to Unakoti I had the pleasure of the company of one young, energetic police office Mr. Darlong of the local police department. He informed that “the entire Darlong tribe of 39,000 has taken to Christianity leaving behind our ancestors’ faith of celebrating Unakoti.” He added “but we haven’t taken to extremism. Our schools are in English medium and we learn Bengali (of the majority population) as well.” Dr. Partha Dasgupta, an educationist and a native of Tripura, added “we are in the right direction, but lot more to go to make us a prosperous state.” 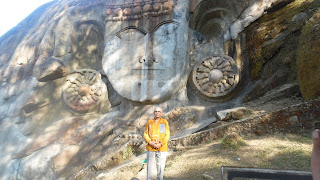 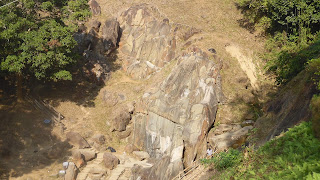 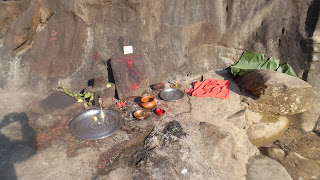 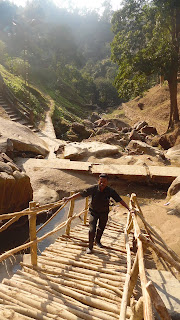 Bamboo stair to a bathing hole 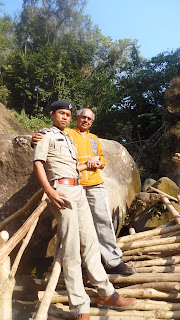 With Police Officer Mr. Darlong on Bamboo steps Leading to the Bathing Hole 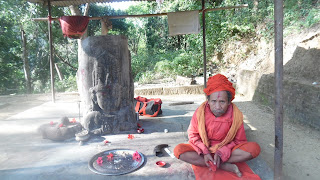 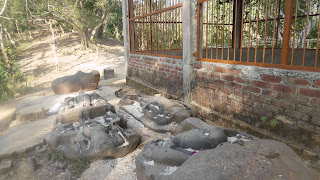 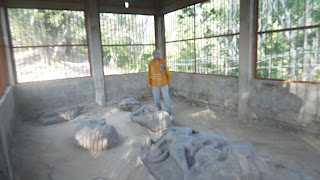 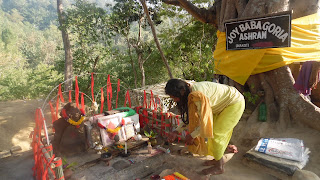 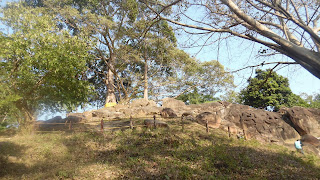 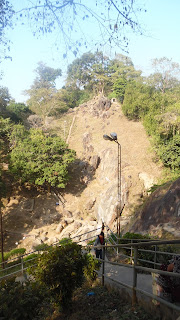 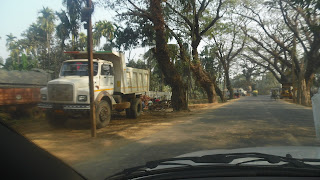 On road to Unakoti 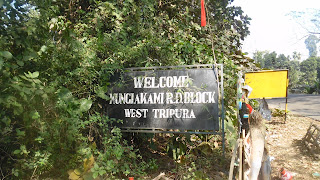 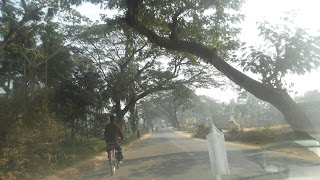 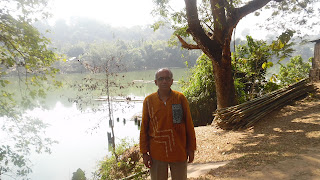 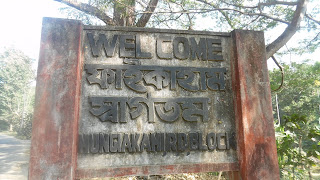 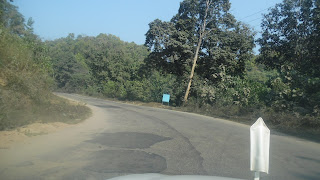 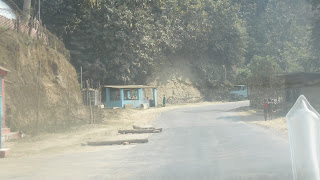 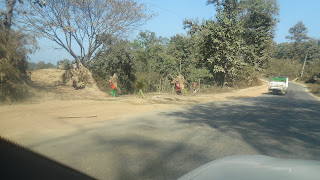 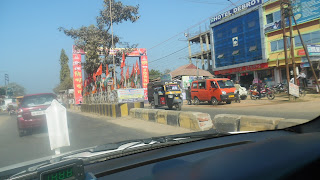 A small town on way to Unakoti 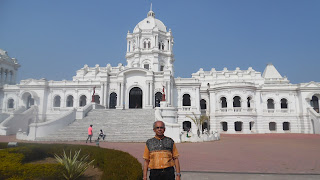 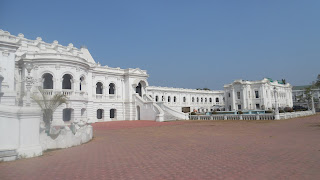 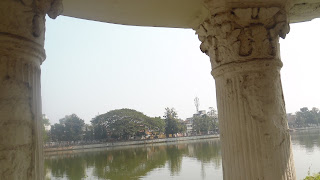 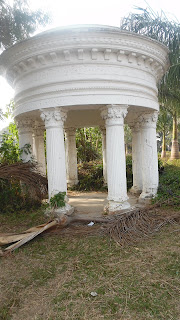 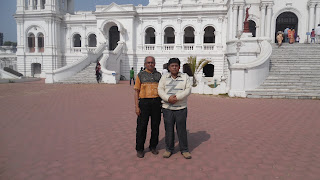 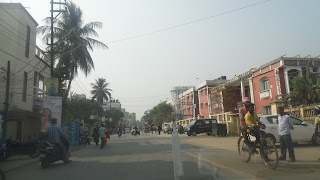 Thanking you for describing the spots visited by you during January '17 of Tripura. I agree with you on the negligence of our Govt. in maintaining/reviving the tourist spots of Tripura, which could have been the remarkable spots for any Indian and outsider. The matter was also informed by me to the District Magistrate of Unokoti District of Tripura after your visit. We may wait for the active steps of them in this aspect.
Hope you are fine. Thanking you, yours -Anjan: February 3, 2017

Fabulous. Really most impressive and grand.

Such a beautiful and wonderful place. Happy journey sir.