Increasingly both independent Bangladesh and West Bengal State of India – together the former Bengal Province of British India – are Islamizing the Bengali literature and school curricula as per several articles, one appearing in the New York Times, the other in India, yet another one in Bangladesh. Yet the poor and middle class Hindus, Christians, pro-secular Muslims and others of urban and rural West Bengal – with Calcutta (Kolkata) its capital – decry this Islamization and Arabization in every casual conversation yet are too terrified to protest against a perceived tyranny of the ruling elites. This is of course true for morally-and-bravery-challenged West Bengali population. This is not true for Bangladeshis. They are still alive and kicking.
During a 2017 trip to the Subcontinent what was puzzling to find out how even in 2017 minority Hindu population of Bangladesh is fleeing to India, especially because Bangladesh is apparently being run by a pro-tolerant Awami League party. During a trip to New Garia Station at the southern end of Kolkata (Calcutta) Metro I found one green coconut seller Dilip Babu, or Mr. Dilip, a Hindu, a skeleton of 5 feet tall person, possibly in his fifties, wearing dirty pair of pants and an undershirt when asked said he is from Perojpur, in southern coastal Bangladesh. He knew some individuals I have met from the district: Prof. Chitta Ranjan Mondal, former Member of Bangladesh Parliament Mr. Sudhangshu Sekhar Haldar, among others. He knew a Hindu monk engaged in social work in his homeland. When asked why a poor person like him would migrate to India leaving ancestral homestead, he remarked “for poor oppressed-caste people like us it is increasingly difficult to live there with our family. Women are always a target. Moreover, I don’t think my son would have been able to go to a top engineering college like Bengal Engineering College where he is studying now. There is lots of official discrimination against us.” I asked, “Really?”
I still refuse to believe this.
Then I ran into Bikash, 27, who fled to India 15 years ago. He said after continued fleeing of Hindus our family was one of the few minority Hindu families left our Barisal village. My father is a well-known school teacher. To drive us out there were 11 night-time attack by dacoits (armed gangs) on our family, but wealthy Muslim families were spared. All of our movable assets were taken away. We were afraid of being killed. When we saw our attackers in the bazaar the police said “don’t report to us. We won’t arrest them.” Finally during an attack by Muslim thugs they kicked my father in the back so hard that he was hospitalized and his back was almost broken. Then my parents said that I must leave our homeland for India. I left my parents when I was 12. I crossed the border illegally through a smuggler. Now I am 27. I have obtained an Indian passport. I haven’t seen them in 15 years.” What is worth noting that this high-energy boy, a step away from being a street child himself, has opened an N.G.O. to educate street children at MajherHaat in Kolkata!


Then there was this Kolkata (Calcutta) carpenter, Tarun M, a young Hindu of early 30s, skinny, possibly 5’ 3”, when asked where he is from, answered “South 24 Parganas District,” a southern suburb of Kolkata connected by suburban train service. But his accent gave away his identity. Then he said, “I am actually from Hatia Island near Chittagong City in Bangladesh, you wouldn’t know that place. I came recently.” I asked “Weren’t there need for carpenters in Chittagong, a booming metropolis?” He replied, “Uncle, do you know anything of my desh (homeland)? How can a poor or bhadralok (i.e. middle class) Hindu live there? Although many of my family members (i.e. parents, brothers, sisters, uncles, aunts) still live there, but they live subjugated. They can’t say anything including when they are robbed.”

“Don’t you live like a second-class subjugated citizen anyway in a foreign India?”

“No, uncle. I have a ration card, ID card, and even a voter card. Our women are not threatened. No one takes our crop forcefully. I paid (bribe) to local TrinaMool (ruling West Bengal State) politicians and police to get those cards.” Then he quickly added, “It is not just Hindus but majority Muslim Bangladeshis are also coming to West Bengal and getting all these (IDs).” He then pointed to the Muslim workers at the construction site across the street. “Ask them.”

Incidentally, construction is one of the few areas where low-skill individuals can get a job in urban sector after the demise of industrial sector in post-independence (1947) India once Communist Party of India-Marxist (CPM) took state power in 1977 in India’s second-most industrial state. During the 34 years of their rule tens of thousands of factories closed due to Communist agitation. By the time there was an effort to bring back industrial jobs CPM was ousted by a virulent anti-Communist Miss Mamata Banerji of TrinaMool (Grassroots) Congress Party. She too has failed to attract jobs because of her ultra-populist rhetoric. But the construction sector remains a bright spot as 90-million strong West Bengalis who now find jobs out-of-the-state for lack of development in the state buys homes for their retirement or for their parents who live in the state. There is a belief among many that these construction jobs are being taken by Bangladeshis not West Bengalis. This is a serious issue, true or false, and can turn into violence and political liability unless checked early.

Wouldn’t it be beneficial for both Bangladesh and West Bengal if folks like Tarun, Dilip and Bikash were able to serve their Bangladesh homeland? Then there is Aunt Shil Mashi, a widow, surviving away from her homeland. When asked why she has left her ancestral land, she just said, “How can we live there?” Why a stable, pro-tolerant Bangladesh Government is not able to keep their Hindu minority for their own benefit still puzzles many. Is Islamization of Bangladesh education speeding up the process? Is Hindu-majority West Bengal also heading in the direction of anti-Hindu Islamization? Where would West Bengalis flee then?

Here are a few recent articles: 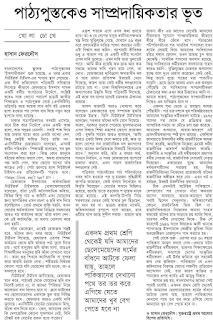 From Dainik Jugasankha, January 23, 2017
Nobel Laureate Rabindranath Tagore is out because he used the word "temple" in his poetry: 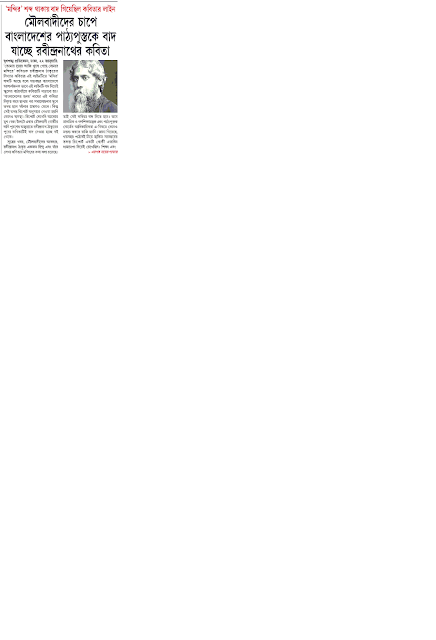 Here is an article of Islamization of Education in Hindu-majority West Bengal State:

Secularising gone wrong? Row after Bengal government replaces 'RAM' with rong in textbook rainbows
The commonly used Bengali term for a rainbow is "Ramdhonu", which literally translates to "Ram's Bow" has now been replaced by "Rongdhonu" in the new text books.

http://indiatoday.intoday.in/story/mamata-banerjee-secularising-textbook-west-bengal-government-ram/1/856628.html
Posted by Empire's Last Casualty at 8:14 AM