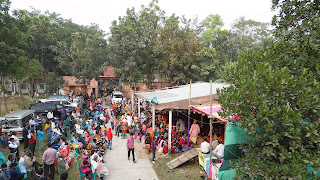 Crowd at the Entrance
In the 1990s when the Madaripur Ashram was in serious hardship they approached Probini via Probini-supported Mahilara Ashram where Probini had just established a school and a building named Nihar Kana Bhaktabash and Bidyaloy (residence for devotees and school). The Madaripur Ashram was headed by then Brahmachari (monk-in-training) Jiban Maharaj. Maharaj received his monkshood thereafter becoming a swami or ordained monk from the Bharat Sevasram Sangha monastic order founded by Swami Pranavananda – also a freedom fighter of Indian independence – in nearby Bajitpur village in early 1910s. Afterwards Dr. Sachi G. Dastidar of Probini visited the place to ascertain the need while staying at the Legal Aid Society’s guest house. Condition of the ashram then was truly wretched as the ashram, Hindu temple, boys’ dorm, devotee residences were destroyed in 1971 by the Army of the Islamic Republic of Pakistan and its Bengali Islamist allies. A Muslim family had built an illegal two story building on the property. With much efforts from the swami and Sachi the ashram was liberated, illegal occupier removed by the local administration and Probini rebuilding the boys’ dorm starting a revival of teaching, learning and prayer at the ashram. (The expanded boys’ dorm now has 52 residents living on campus. For additional information please see http://empireslastcasualty.blogspot.com/2008/12/educating-poor-and-orphaned-in.html.) 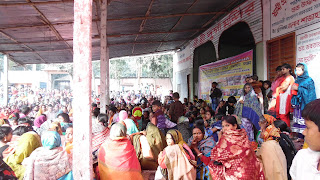 A Section of the Crowd in the Pandal (marquee) Area

Probini Foundation received an invitation from Rev. Jibon Maharaj – Swami Satyapriyananda – of Madaripur Seva Asram, Pathak-Kandi, Bangladesh to attend a Centenary Celebration of the Ashram and the boys’ dorm, and 121 years Birthday Celebration of Swami Prnavananda. This writer arrived there before January 22nd, the day of celebration, when the Pathak-Kandi area of Madaripur City was in the mood of celebration. The boys of the Probini-built dorm started decorating the pandal (marquee), and prepare for music the night before the event. The invited guests stayed in guest rooms named Ganga, Yamuna and Sarasvati, the holy rivers. The celebration started with a puja-prayer. Rev. Swami Prottananda and Rev. Swapan Maharaj from nearby Bajitpur Ashram, and headquarter of Swami Pranab Order, did the puja and coordinated cultural events. All the local politicians, Members of Parliament, administrators – all Muslim – prominent engineers, architects, teachers, doctors and other professionals – Muslim and Hindu – attended the event, along with tens of thousands of poor, oppressed-caste Hindus – peasants, petty traders, sweepers, laborers, office workers – joined in the prayer service. It was a mind boggling experience for me. Hindus, especially women and children from nearby areas and Pathak-Kandi started gathering there since early morning. It was like a massive human joyful population, more like a river of flowing Hindus in the Muslim-majority nation following their indigenous tradition. There were many Muslims who came to celebrate the event as well. On one side of the ashram compound a dais and a pandal was built for puja by Rev. Swami Prottanandaji. The cultural program was moderated by Swapan Maharaj. All the artists were from Madaripur District. Several thousand people from the neighborhood patiently attended the entire event. Several politicians and dignitaries gave their speech, including this writer. Bhog Prasad (blessed food) was served to all devotees after the service. What was truly inspiring is that so many of the oppressed individuals told me that “now that you are with us we will serve our homeland, fight to make it better and tolerant, yet not leave the land of our ancestors to flee to India. Om Shanti. Om Peace.”  It was wonderful to hear those words. 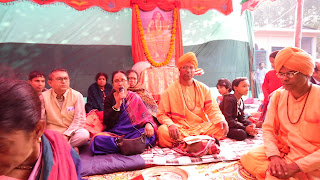 Dignitaries at the Dias with Hindu Monks
Seeing a place come alive from total destruction was really a miracle and uplifting event for me. 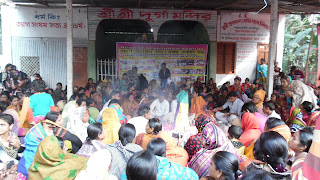 A Section of Devotees at Sri Sri Durga Mandir Temple 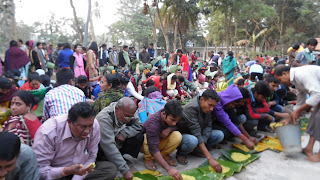 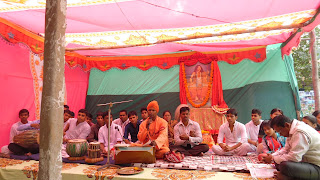 A very encouraging and refreshing news from Bangladesh on auspicious day of Maha Shiv Ratri.
Hindus of Bangladesh are not oppressed castes, as mentioned in your article, but Kshatriyas.
They are the protectors of Hindu religion, thus Kshatriyas by Karma (Lord Krishna in Bhagawad Gita,)
Maharishi Valmiki, author of Sanskrit Ramayana, is known as a Maharishi, a Brahmin of highest order. Maharishi Vyas Dev is known as author of 18 Puranas and Mahabharat. Chandra Gupta Mauria was greatest Hindu king. Nobody cares for their caste.

Suggestion: Please advise the Bangladeshi Hindu teachers and professors to use "Acharyas, Guru," priests to use "Purohits, Panda," doctors to use  "Vaidyas or Doctors," and attorneys to use "Vakils or Judge"  soldiers and policemen to use "Singhs," technical professional as "Engineers," businessmen as "Baniks or Sahas" etc. (as most of the Indian Hindus do.) Please, help them rise in caste hierarchy thru education and diversifying their professions. Eventually oppressed castes will disappear in a decade or two. Good luck!

Posted by Empire's Last Casualty at 7:23 AM

This was a great experience for me. Thanks to Jiban Maharaj, Madaripur for inviting us three months ahead of time.