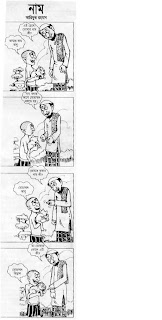 AFP/Dhaka
A court in southwestern Bangladesh yesterday found a cartoonist guilty of “hurting the religious feelings of the Muslim community” and sentenced him to two months of hard labour,.
Arifur Rahman, 25, was tried in absence over the drawing, which sparked street clashes and riots in the capital Dhaka when it appeared in a satirical magazine two years ago. Rahman, who was arrested but later bailed, said that he was unaware of the trial. The cartoon appeared in Bengali newspaper Prothom Alo’s weekly and now defunct magazine Alpin. “He has been given a two-month, hard labour jail sentence and a 500-taka ($7.40) fine,” said magistrate Kaisarul Islam, who presided over the case in the city of Jessore. “I am not on the run and have not been told about the case,” Rahman said in Dhaka. “I will speak to my lawyers.” ~ end
An interview with Arifur Rahman at Cartoon News here.
The government confiscated all copies of the now-defunct satire magazine in which the cartoon was printed. Amid a protest by Islamic groups, Prothom Alo’s editor and publisher apologised for printing the cartoon, and fired the cartoonist.
On Feb 4, the High Court ruled Arif’s detention illegal and ordered his immediate release. He was freed on Mar 20 this year. The cartoonist’s arrest and detention also earned criticism from local and international rights groups. In January, human-rights watchdog Amnesty International demanded Arif’s release, terming him “a prisoner of conscience”.
In one of his cartoons published in Alpin (17th September, 2007 issue), an old man was asking the name of a child with a cat in his lap. The boy answered and was scolded for not putting Mohammad before his name, as he was Muslim. Then the man asked about the animal and the scared boy put the holy prophet’s name before the cat as suggested by the elder. Things turned bad the moment it hit the stands. The furious mullahs were on rampage and Arif was suddenly the enemy of the state! His story really starts from here:
So what was the idea behind the cartoon? Why did you draw it?
Well, i never thought this was going to be such a big issue. The joke I used is a common one in our locality, infact in that zone. I heard it when as a kid and even when I grew up. My idea was to highlight the faulty religious teachings by some of our elders where they advise to put the name of our holy Prophet before every name, when they should also clarify where it shouldn’t be used. What surprised me, I learnt after my release that the same joke was used in a publication of Islami Chatra Shibir name Kishorekantha (November, 1998 Issue).
Are you safe? Do you feel the JMB are done with you?That’s the thing still haunt me even in my dreams. I usually keep a low profile; never in anywhere have I introduced myself as Arif. But still I don’t feel safe; they can be anywhere and even kill me if they want. I don’t even work in the shop where I used to.
End
Posted by Empire's Last Casualty at 6:18 AM