Hindu Minority Right Declining in Bangladesh even in Secularist Rule 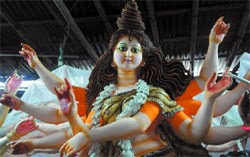 The right to religion
by Khamin
Khamin writes about the dwindling rights and freedoms of the minority Hindu population of the country, from the failure of secularism to prevail in its true essence
Like any other day, Rikta Devi arrives at the Dhakeshwary Mandir – perceived as the most symbolic and significant Hindu temples in the country – with her two young daughters. However, the zest and enthusiasm with which she usually approaches her religious rituals seem to have waned considerably in recent times, especially when she recalls the vile sexual harassment her daughters are routinely subjected by loafers, en route to the temple. The particular issue has turned into something of a commonplace as many Hindu women attest to walking, with their heads held low, past such distasteful taunts which seemingly condemn them for their religious affiliations, especially during the time of Durga puja. Even as the ceremonial rites are being performed at temples, there have been instances where insults and abuse have been hurled at Hindus from fanatics which have even resulted in bloody fights. There have also been conflicts of interest in terms of religious practices, especially in areas where mosques and temples stand in close proximity. ‘Sometimes, the timing of the azaan and the start of a puja coincide and whenever this happens, we always stop all our activities in respect of the other faith but there has been no reciprocity on their part. There have been various examples of peaceful coexistence between followers of both these religions from years gone by and that had continued for a long time. However, it seems that a high level of negligence and intolerance towards other religious practices have developed in the Muslim community and the prospect of facing more troubles while performing our rituals will only increase during this month,’ says Rina Bhattacharya, a caretaker of Joy Kali Mandir in Wari. ‘Such unsavoury issues are occurring quite frequently and this is due to the lack of respect some misguided people are showing towards other religions,’ says Pradip Kumer Chakrabarty, chief executive of Dhakeshwari temple. ‘The mandir is a holy place where people come for worship and this kind of behaviour only points to the intolerant and fundamentalist approach certain people have started to adopt,’ he adds. Such circumstances would justifiably warrant the need for order and security to be ensured, however, there is a visibly distinct lack of any law enforcer patrolling the premises of the temple. ‘First of all, we need to consider the threats that are being posed to the large number of female devotees that frequent the temple but moreover, valuables such as gold ornaments are also being carried and served as offerings by various devotees to decorate the deities. This also poses the threat of robberies,’ explains Chakrabarty. According to a census in 2001, Hindus account for nearly 9.2 per cent of the religious population in the country and there are around 150 temples in Dhaka city. While the numbers may not seem too significant, they undeniably represent and contribute largely to our heritage and culture. However, hundreds of temples urgently require reconstruction and renovation, including the historic Kalibari Mandir in Ramna, the Shanir Mandir in Shanir Akhra, the Shiva Mandir in Dhaka University and the Dhakeshwari Mandir are more or less in the same state as they were when built. While mosques receive government funding via the Islamic foundation for maintenance, there is only the Hindu Kalyan Trust to look after temples. ‘The government must take initiatives to preserve mandirs through renovations and reconstruction even if it is only done for the conservation of heritage,’ says Pranabesh Dash, a student of Dhaka University. Instead, there have been various allegations levelled at ruling parties in the past, of its musclemen grabbing land and properties, including robberies of idols from mandirs. There have also been allegations against henchmen belonging to the ruling Awami League government, of trying to occupy a temple as well as damaging the deity inside, at the RM Das Road, Sutrapur in old Dhaka on September 11. ‘In previous years, the government accorded proper protection to temples around the country. However, for the first time it seems that this year it has failed to do so as temples are being attacked while deities are being demolished weeks before festivals, when it should be, and this does not reflect well on the present government,’ says Lokkhon Chandra, a member of the puja committee in Sutrapur. ‘The minority population of Hindus are looking to the Awami League again to restore their freedoms which they had lost during the tenure of the previous BNP government. We have not had any evidence of the government doing so as yet,’ says Delip Roy, a secretary of Hindu parisad at Shakahari Bazaar. Delip believes that the situation will not change for Hindus in Bangladesh until the preambles of the 1972 constitution - which had been altered following the eighth amendment - based on the four principles of nationalism, secularism, democracy and socialism, are not reinstated. ‘We feel that we are treated as second class citizens of Bangladesh following the declaration of Islam as the country’s state religion. We feel discriminated. The failure to implement secularism in political and social life is a matter of great regret,’ concludes Noresh Kumer, the president of Joy Kali Mandir committee.
End
Posted by Empire's Last Casualty at 1:11 PM